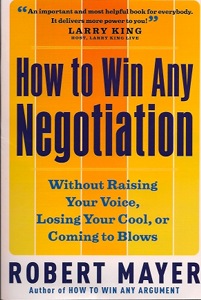 How to Win Any Negotiation book cover

Attorney Robert Mayer has appeared in more than 130 radio and television interviews to discuss legal issues and negotiation. In How to Win Any Negotiation Without Raising Your Voice, Losing Your Cool, or Coming to Blows (Career Press, $15.99), published in 2006, he discusses how to go about successful negotiations. He believes able negotiation requires flexibility and a multi-dimensional approach, saying in the book’s introduction that “today’s super negotiator is a problem solver who seeks hard bargain results while using a soft touch.”

The successful negotiator relies on an arsenal of possibilities, according to the author. These are drawn from advances in psychology, linguistics, trial advocacy, sales, and management communications; as well as more than 40 years of his professional experience as a negotiator and attorney representing companies, small and large, foreign governments and entertainers.

The 288-page softback book is divided into four distinct sections: Soft Touch: Finessing, Influencing and Persuading Others; Trouble Shooting: Settling for More; Hard Bargain: Winning When the Score Is Kept in Dollars; and The Deal-Maker’s Playbook: Low-Impact, High-Yield Tips, Tricks and Tactics.

Mayer, a professional mediator and Los Angeles resident, shares a law practice with this two children. According to promotional materials, Mayer interviewed over 200 haggling, selling and negotiating pros, including street and bazaar merchants in Bombay, Istanbul, Cairo, and Shanghai, to gather insights for his audience. 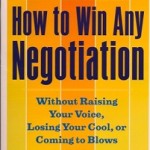 Click here to buy How to Win Any Negotiation

Tags: how to win any negotiation, robert mayer