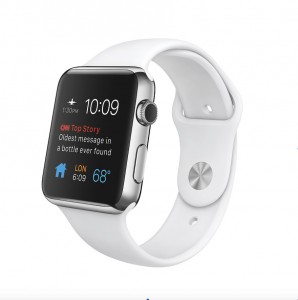 Less than a month after I bought a new Swiss made watch it stopped working. I contacted the manufacturer per the warranty instructions to discover the company had been purchased by another watch seller. Dozens of calls, emails and faxes and a month later I’m still waiting for my repaired watch to arrive. As I think of replacement options and future purchases a smartwatch has crossed my mind. If a traditional watch under warranty was such a hassle what would a smartwatch offer?

Thinking of acquiring your own bit of wrist software bling? If you plan to buy a smartwatch you will be among 6 percent of Americans who own one, according to Watches and Jewelry US, September 2015, a report by Mintel. Researchers at the company believe by 2020 sales of traditional and sport watches could suffer since 21 percent of survey respondents who bought a watch in the previous year said they were very interested in the smartwatch trend. Among men between 18 and 34 years old 37 percent said they were interested.

“There is a very real possibility that smartwatch sales could cannibalize sales of other watches over the next five years,” said Diana Smith, senior research Analyst, Retail &amp; Apparel at Mintel. “This scenario assumes that the current smartwatch buzz manifests into sales that can withstand momentum as more functional apps are created, more developers launch new products and prices come down. It also assumes that sport watches continue to grow in light of consumers’ heightened interest in using them to track their fitness levels and compete against others in various forms of exercise. An ideal situation for the smartwatch sector would be one where smartwatches (and sport watches) lift the entire category, while traditional watches – which comprise the majority of total watch sales – remain at least steady.”

It is worth noting that traditional watches were favorites among respondents to the Mintel survey, where 31 percent of men and 30 percent of women preferred them. Among the survey takers 25 percent, including 32 percent of older Millennials (consumers aged 29-38), said they buy watches mainly as a fashion statement