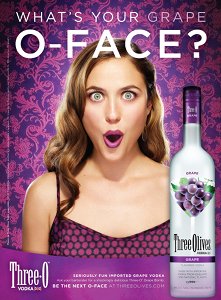 Earlier this year, Proximo, a spirits importer, launched a new, multi-million dollar television comic advertising campaign for Three Olives Vodka, the brand’s first broadcast outreach. Parallel efforts in print and an online contest will support the What’s Your O-Face? Campaign and its 10 new 30-second television spots. The idea behind the campaign is to emphasize that drinking their vodka is fun and promote the flavors of the company’s vodka line. Scroll down to watch Three Olives Vodka ads.

“The development of our new campaign was driven by research that produced two key findings: first, that consumers felt the fun had been taken out of vodka with virtually all brands scrambling for the same crowded, so-called ‘luxury’ positioning,” said Elwyn Gladstone, vice president of Marketing at Proximo.

“Secondly, the Three-O flavor range has become the benchmark amongst flavored vodkas for its wild, surprising and intense taste experience. These findings are reflected in the hilarious imagery of the new campaign, featuring a series of situations that one would expect to garner a look of shock, but instead are met with a stoic impression. That is, until the subject tastes shockingly delicious Three-O Vodka.” 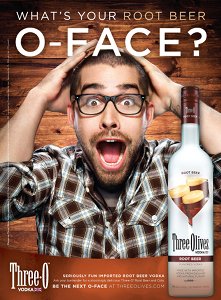 The $10 million television campaign, created by Agent16, formerly Mezzina Brown & Partners, a New York-based advertising agency, was launched August 31 on cable channels BRAVO and E! Plans were in the works for buys of interactive, expandable rich media on TMZ and Perez Hilton to showcase the complete collection of TV spots, as well as continuing the print campaign in national magazines, including Maxim and US Weekly.

Imported from England Three Olives Vodka is handcrafted in small batches and made from English wheat after quadruple distilling and quadruple filtration. It’s available in 17 flavors including Cherry, Grape, Passion Fruit, Pomegranate, Chocolate, Mango, Root Beer, Tomato, and Triple Shot Espresso, and Bubble, the newest flavor. It sells for $19.99 and up for a 750 milliliter bottle.