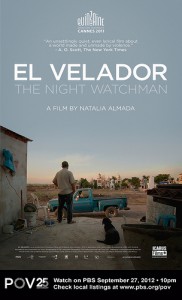 Mexico’s drug war is said to have resulted in 50,000 violent deaths from the last few years to date. One place where the dead are remembered is in a cemetery in Culiacan, Mexico where many of the country’s drug lords are said to be buried. El Velador (The Night Watchman), a 72-minute 2011 documentary about a slice of everyday life with the night watchman who looks after the cemetery and its elaborate mausoleums, is airing in the United States on PBS and as part of a national museum tour including Wexner Center for the Arts, Columbus, Ohio; Walker Art Center, Minneapolis; Nelson-Atkins Museum of Art, Kansas City; and Yerba Buena Center, San Francisco. Scroll down to watch a video clip of the documentary.

“Drugs are trafficked and consumed around the world and yet Mexico is the battlefield of the war on drugs. I hope El Velador is a film that will touch audiences and help us understand what it means to live in a situation of violence and what socio-economic conditions lead to violence,” said Natalia Almada, director of the film, by email in response to a question about why she filmed the documentary and how she believes it is relevant to United States audiences today. 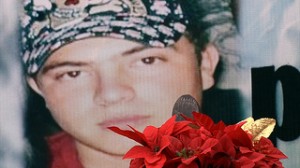 A scene from El Velador

The film begins inside the watchman’s truck with a view of the cemetery through a dirty and fogged up windshield reminiscent perhaps of the public’s view of the war itself. With an introspective slow tone the film is notably dark during the evening scenes, featuring background television and radio news and little Spanish language dialogue with English language subtitles. The modest, poor looking construction workers with torn shoes present a contrast to the expensive structures they build for the newly departed. Also notable are the luxury cars and the large colorful banners each with a photo and years of birth and death commemorating of the deceased.

“When I first went to film at the cemetery where the film takes place in July 2009, there were four new mausoleums under construction and a tractor was digging up the dirt for a new hole to bury another 300 bodies,” said Almada in a press release. “The ‘progress’ of the cemetery mirrored the violence that was spiraling out of control.” 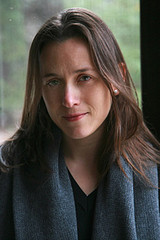 “In making El Velador, I hoped to gain entry to that world of violence. To experience what it means to live in that context, to work, to mourn, to sweat, to sleep there. I wanted to pause, and I wanted others to pause and be suspended in that place and moment where violence has just occurred and where violence is imminent. By restricting myself to one small corner of the cemetery, I came to realize that it is only by paying attention to the details that we can begin to fathom the complexity of violence,” said Almada in her filmmaker statement (she referred queries to the POV and film websites).

The film, co-produced by POV (Point of View) American Documentary Inc. and Natalia Almada (Al Otro Lado, 2006; El General, 2010), had a $300,000 budget. Almada, an award-winning director originally from the state of Sinaloa in northern Mexico, was also producer, director of photography and editor of the documentary. She received the 2009 Sundance Documentary Directing Award for her film about her great-grandfather, Mexican president Plutarco Elías Calles.

POV (Point of View) is one of television’s longest-running showcase for independent non-fiction films on PBS. Since 1988, POV has presented 300 films to public television audiences across the country.