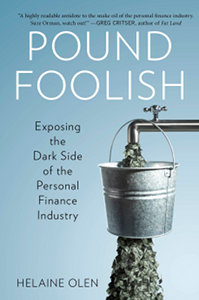 In the 1950s, less than 5 percent of Americans had stock market investments. By the 1980s, that number had quadrupled to one in five Americans and by the millennium more than half of the population had ties to the stock market, according to journalist Helaine Olen.

She is convinced that a financial products and self help industry promoted a dream to Americans. It had the allure of magic, Olen says in her book Pound Foolish Exposing the Dark Side of the Personal Finance Industry (Portfolio/Penguin, $27.95), promising to make up for stagnant salaries, unequal income and dwindling financial safety nets. The sellers? People, businesses and organizations who stood to gain from the public’s buy in of the dream. The personal finance and investment industrial promised many things it couldn’t deliver, she says.

The 292-page hardcover book she began working on in 2009 was published in 2012. It is divided into nine chapters: What Hath Sylvia Wrought?, The Tao of Suze, The Latte Is a Lie, Slip Slidin’ Away, The Road to Pas Tina, I’ve Got the Horse Right Here, An Empire of Her Own, Who Wants to Be a Real Estate Millionaire?, Elmo Is B(r)ought to You By the Letter P, and We Need to Talk About Our Money.

Olen concludes that given the current economy personal financial success born of following the advice of self proclaimed self help gurus is unlikely. Financial planning can help people get out and stay out of debt, be instrumental in preparing for retirement and reaching long term goals; but no amount of financial planning can overcome a downward economy or bad circumstances, she says. What to do? She recommends being honest about our personal situation and beginning a conversation about our community’s financial situation. 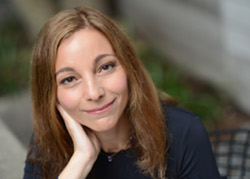 A freelance journalist formerly in charge of the Money Makeover series at the Los Angeles Times, Olen’s work has appeared in The New York Times, The Washington Post, Slate, Salon and Forbes.  She lives in New York City with her family.