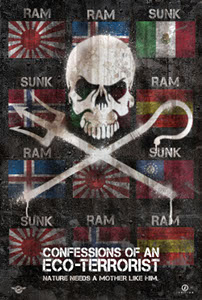 Confessions of an Ecoterrorist film poster

Where documentaries often adopt a slow pace side by side with a serious and even somber tone Confessions of an Ecoterrist, a 90-minute docu-homage to the Sea Sheppard, its captain and crew and their exploits, manages to address a topic the film makers are obviously passionate about (30 years of activism attests to that) with a light tone, self deprecating humor and an undertone of incredulity, is fast paced and action packed, for a documentary. Completed in 2011, Confessions of an Eco-Terrorist Nature Needs a Mother Like Him is dedicated to journalist Bob Hunter and contains footage from 1977-2010. SnagFilms, a distributor of independent films on digital platforms, is releasing the feature documentary in the United States for pay-on-demand purchase on Earth Day, April 22, 2012. Click on the play button below to watch a trailer of the film.

The organization’s seaborne positive activism activities over 30 years are summarized and shared in a first hand one sided, account, by Peter Jay Brown, director, activist and longest serving Sea Shepherd crew member. He tells of the exploits, successes and disappointments of Captain Paul Watson and the Sea Shepherd Conservation Society, the stars of Whale Wars, Animal Planet’s Emmy-nominated series. The narrator’s admiration for Watson and the crew is evident. 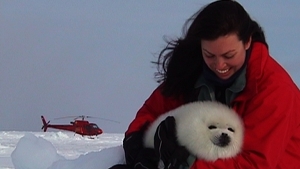 Baby seal scene from the film

He peppers his narration with humor. For example, early on he explains that the organization relies on the work and support of volunteers aboard including many vegans. “A race of highly dedicated people; healthy, strong and perpetually pissed off,” he says of them. At the same time, he explains volunteers are not on a pleasure cruise and illustrates the hardships they endure such as constant seasickness and limited access to comforts such as showers (once a week). Watson he says is “a brilliant tactician and strategist with uncanny good luck.”

“Many young people today are losing hope. ‘Why bother? Nothing changes!’ they might say. Well I am here to say that change starts with everyone of us and those of us who are determined actually get things done. Get off the couch and get out there and make a positive difference. I did, so can you,” said Brown when asked to comment on the goal of the film.

During the society’s voyages the crew engaged in dramatic conflict including the boarding of ships, arrests (of the captain by the Canadian government, for example), being fired upon by a multimillion dollar vessel of the Norwegian Navy, boarding by an Ecuadorean admiral and successfully ramming and/or sinking illegal whaling and fishing vessels around the globe. According to promotional materials, the group is credited with stopping drift-netting worldwide and saving the lives of millions of marine wildlife.

Most of the film takes place on board or near a Sea Sheppard vessel, in the high seas and coastal areas of the United States, Canada, Antarctica, Faeroe Islands, Norway, Japan, and Galapagos islands of Ecuador. Among other things it includes images of the bloody killing of harp seal and the blood smeared faces of the seal “hunters.” 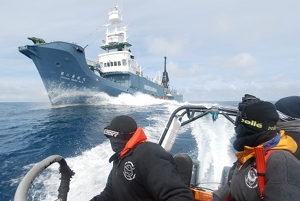 A scene from the film

The film was released in German speaking countries in December 2011 and is available there in cinemas and on DVD. In the United States, it is scheduled to become available in the VOD (video on demand) sections of cable networks, iTunes, Hulu-Plus, Amazon, and NetFlix in the coming weeks. The price is being determined. DVDs should be available in late April 2012, according to a spokesperson.

Established in 1977, the Sea Shepherd Conservation Society (SSCS) is an international non-profit, marine wildlife conservation organization with a stated mission “to end the destruction of habitat and slaughter of wildlife in the world’s oceans in order to conserve and protect ecosystems and species.” Toward this end Sea Shepherd uses “innovative direct-action tactics to investigate, document, and take action when necessary to expose and confront illegal activities on the high seas.” SnagFilms features free, sponsor-supported, on demand viewing of more than 3,000 award-winning, fiction and non-fiction titles. SnagFilms’ curated collection is available on its own site and a digital network of more than 110,000 affiliated sites and webpages.