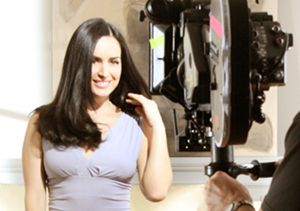 Procter & Gamble recently hired Ana de la Reguera, a Mexican actress, to promote its Pantene Pro-V line with a new Spanish language ad campaign that appeared in Hispanic magazines, TV stations and websites across the United States in June 2009. Company representatives declined to share details about the campaign in spite of several email and phone requests. Scroll down to watch the ad and a behind the scenes interview with de la Reguera.

“We feel honored that Pantene has received more awards than leading salon brands,” said Carolina Varela, brand manager for Pantene. “Her stunning beauty, gorgeous hair and easy spirit make her an ideal addition to the Pantene family of spokesmodels.”

“My work demands constant hair brushing, combing and styling. For a fraction of the cost of expensive salon brands, Pantene keeps it healthy,” De la Reguera was quoted in a press release.