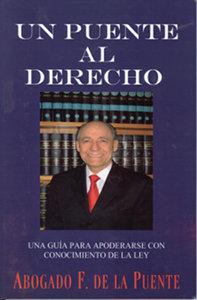 Oregon attorney Frank de la Puente believes the people with the least economic and political power, and the most vulnerable to abuse are those who do not know their rights. To address this issue he wrote Un Puente Al Derecho, Spanish for a bridge to the law (Blacker Publishing, Inc., $24.95), a book in Spanish with information about legal issues for Hispanics, especially those who do not speak English and the undocumented. He estimates there are eight million undocumented Hispanics many of whom could benefit from the information in his book.

The 205-page softcover book is divided into four main parts: Abogados, Jueces y Cortes (lawyers, judges and courts); La Ley del Divorcio (divorce law); Bienes Raíces (real estate); and Inmigración (immigration). His goal is to provide information about what for many people is a complex topic in easy-to-read Spanish illustrated with case examples.

He includes information about the process of divorce, child custody, support, distribution of property, and the rights of unmarried and homosexual partners. The section on real estate informs the reader on the aspects of buying and selling a house, including appraising, financing, escrow and insurance. A section on immigration provides information about the legislative proposals for immigration reform, and obtaining a resident visa through a family member.

De la Puente, a trial attorney for 20 years, spent four years of night and weekend work to research the laws of states other than his home state and write the book. According to a representative from the publishing company the book is gaining momentum. In October 2010, the Library Journal Online reviewed the book which is listed as a new release on AmericaReadsSpanish.com.

Promotion of the book has been primarily by press releases and review submissions. The author, who has been a guest on Spanish language radio talk shows in Dallas and Eugene Oregon for 16 years, has made two TV appearances on Univision Television in Portland, Oregon; and appears once per month as a guest of Nelson Zepeda’s Spanish radio talk show, 1520 AM, Portland, Oregon, fielding legal questions from listeners.

De la Puente was born in Callao, Peru in 1957. When he was nine he and Ines Arimborgo Bondy, his single mother, emigrated to Los Angeles, California where he grew up. From 1969 to 1971 he served in the United States Army. During that time, he served one year in active combat as an infantryman with the First Cavalry Division in the jungles of Vietnam. After the Army and graduating with a degree in mathematics from University of California, Irvine he worked as an aerospace engineer in California for Hughes, Northrop and Rockwell. In 1990, he graduated with a law degree from Willamette University College of Law in Salem, Oregon.

He started his law career as a special prosecutor in Marion County, Oregon, before becoming a federal criminal defense attorney for 13 years. Today, he primarily practices civil litigation including contract disputes including real estate and foreclosures, federal civil forfeiture, divorce and child custody, and actions for damages arising out of personal injury. 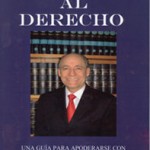