Listen to podcast with Joaquin Nuño-Whelan, vehicle chief engineer for small cars, Chevrolet about his job and the Sonic 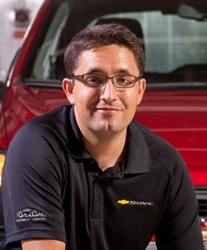 A podcast interview with Joaquin Nuño-Whelan, vehicle chief engineer for small cars, Chevrolet is available in the Podcast Section of Hispanic Marketing & Public Relations, HispanicMPR.com. During the podcast, he discusses his job and the Sonic with Elena del Valle, host of the HispanicMPR.com podcast.

Joaquin serves as the vehicle line director for the 2012 Chevrolet Sonic, described as the only sub-compact car made in America. He and his team strive to create a faster, safer and more connected vehicle compared to others of its size with an improved powertrain and increased horsepower for consumers who crave power behind their small fuel efficient rides.

In 1997, Joaquin joined GM and later embarked upon a two-year assignment in Mexico City. During that time, Joaquin led a chassis engineering team in Toluca and developed the alternative energy strategy for GM de Mexico as a special vehicle program manager. While there, he also launched the country’s first Robotics team, which later won the Rookie All-Star achievement, the highest recognition for a first-year team. Upon returning to the States, Joaquin founded Green Place Detroit, a non profit dedicated to providing middle school and high school students the opportunity to make a lasting impact on their community through its urban garden and eco-house projects in Southwest Detroit.

A 2000 graduate of University of Detroit Mercy, Joaquin majored in mechanical engineering. He lives in Royal Oak, Michigan with his wife, Tanya, and their two kids, Isabella and Lander.

To listen to the interview, scroll down until you see “Podcast” on the right hand side, then select “HMPR Joaquin Nuño-Whelan” click on the play button below or download the MP3 file to your iPod or MP3 player to listen on the go, in your car or at home. To download it, click on the arrow of the recording you wish to copy and save it to disk. The podcast will remain listed in the October 2011 section of the podcast archive.