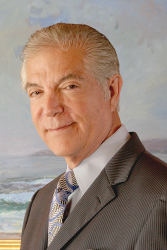 Alex is also chief executive officer of the National Hispanic Media Coalition. Since the late 90s when he was elected president of the organization, Alex has advocated for the Latino community. He led boycotts against the advertisers of the syndicated Howard Stern radio show as a means of getting Stern off the air when he offended the Latino community and the family of the late singing star, Selena Quintanilla-Perez, with his comments following the singer’s tragic murder.

Under his leadership, the NHMC has filed over fifty petitions to deny broadcast licenses with the Federal Communication Commission (FCC), including one against a Spanish-language radio company for encouraging its DJs to air pornographic radio programming to boost their ratings. Alex also led high-profile demonstrations against ABC and its parent company, Disney, for its lack of diversity and apparent exclusion of American Latinos from local news reporters and anchor jobs, and intensified discussions with local TV stations across the country. As leader of one of the more visible organizations under the umbrella of the National Latino Media Council (NLMC), for which NHMC acts as secretariat and staff, Alex was instrumental in the signing of Memoranda of Understanding with NBC, ABC, CBS and Fox in the year 2000.

To listen to the interview, scroll down until you see “Podcast” on the right hand side, then select “HMPR Alex Nogales” or click on the play button below. you can also download the MP3 file to your iPod or MP3 player to listen on the go, in your car or at home. To download it, click on the arrow of the recording you wish to copy and save it to disk. The podcast will remain listed in the September 2012 section of the podcast archive.