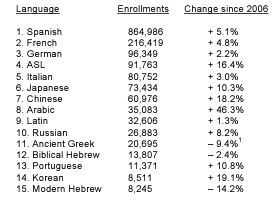 Interest in foreign languages in colleges in the United States increased 6.6 percent between 2006 and 2009. Foreign language enrollment has also been increasingly diverse including a broad range of language studies, according to a new report, Enrollments in Languages Other Than English in United States Institutions of Higher Education, Fall 2009, released December 2010 by the Modern Language Association of America (MLA).

Arabic popularity rose as did Korean and Chinese. Although French, German and Italian were popular Spanish was the most popular foreign language by a wide margin with 864,986 students enrolling in classes during the time period of the report.

“It’s gratifying to see that so many US students recognize the importance of language study for our future,” said Rosemary G. Feal, executive director, Modern Language Association of America in a press release. “The demand for an ever-greater range of languages demonstrates the vitality of the field. Despite troubling cutbacks in language offerings at some institutions, this report shows that overall language remains strong at US colleges and universities.”

The MLA report, produced since 1958, is described as the longest-running and most comprehensive analysis of the study of languages other than English at United States colleges and universities. The report includes undergraduate and graduate course enrollments in languages other than English in fall 2009 for 2,514 AA-, BA-, MA-, and PhD-granting colleges and universities in the United States. The researchers believe these 2,514 institutions represent 99 percent of all higher education institutions offering language courses in the country.

The Modern Language Association of America, dedicated to strengthening the study and teaching of languages and literature, has 30,000 members in 100 countries. Founded in 1883, the MLA strives to provide opportunities for its members to share their scholarly findings and teaching experiences with colleagues and to discuss trends in the academy. According to the MLA website the organization produces twelve new books a year and a variety of publications for language and literature professionals and for the public.