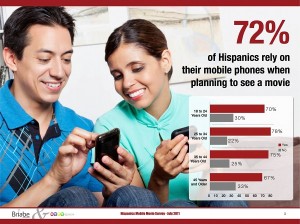 A recently released report indicates mobile phones may play a significant role for moviegoers, especially Hispanics. According to the study results, Hispanics attend movies more frequently than other ethnic groups (these findings second those of a Nielsen study indicating Hispanics represent 28 percent of moviegoers), and many may be using their mobile devices to find theaters, movie times and reviews. The report found that 75 percent of Hispanic respondents said they go to the movie theater once a month, and 25 percent said see movies three times a month.

“This report proved to be a treasure trove of relevant information for both the entertainment industry and marketers, as it highlights numerous opportunities for deploying mobile strategies to successfully get Hispanic moviegoers into theaters,” said James Briggs, chief executive officer, Briabe Mobile.

Seventy-two percent of Hispanic respondent said they use their mobiles to make movie plans; 39 percent view trailers; 35 percent use it to discover movies; 28 percent find reviews; 14 percent buy tickets; and 55 percent use their phones to access movie information within the four hours just prior to seeing a movie, making the survey analysts believe the best time to approach Hispanic mobile phone users is within four hours of the start of the movie. 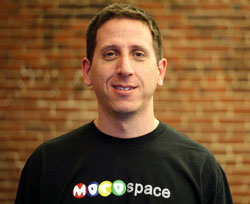 “Hispanics are some of the most highly engaged mobile consumers in the country,” said Justin Siegel, chief executive officer, MocoSpace. “This is why we’ve seen a consistent six-year increase in ad budgets for films and DVD releases shifting towards mobile, with campaigns specifically targeted at the mobile Hispanic consumer.”

The Mobile Consumer: Hispanics, Movies & Mobile, the mobile phone survey from MocoSpace and Briabe Mobile, was conducted June 2011 among 1,130 people including 425 Hispanic survey respondents. Briabe Mobile is a multicultural marketing agency and MocoSpace is a mobile entertainment website.