Hispanics more likely to smoke, many want to quit 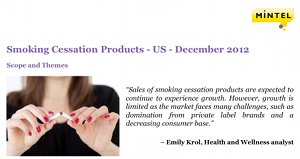 Sales of smoking cessation products may increase 3 percent from 2011-12 and reach $1 billion and growth is expected through 2017 reaching $1.2 billion in sales, according to Smoke Cessation Products US December 2012, a Mintel report. The odds of kicking the habit may be against the average smoker. According to the Mayo Clinic website, only 5 percent of people who try to quit tobacco succeed on their own without a quit-smoking product. The site indicates more than 30 percent “can succeed when using a quit-smoking product.”

It seems some smokers who want to quit fear gaining weight during the quitting process. Forty one percent of respondents to a Mintel survey, conducted online in English December 2012, who have previously quit or are interested in quitting, said gaining weight was their biggest challenge to quitting smoking; 54 percent of those were women and 31 percent were men.

Hispanic respondents to the survey were more likely to smoke than other respondents. Those who smoked appeared more likely to be trying to stop. Mintel staff believes smoking cessation product marketers might consider Hispanic specific outreach.

Hispanic smokers trying to quit who responded to the survey said they were influenced by their friends in their desire to stop smoking. This led Mintel staff to suggest the possibility of marketing program activities with smokers friends.