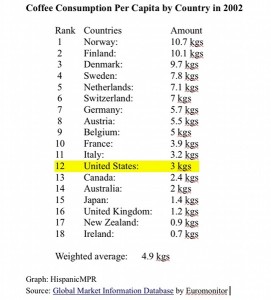 Americans consume a respectable amount of coffee although if we look at the big picture the amount of coffee the typical person in the United States drinks per capita is modest compared to that of many consumers in Western European nations. The top consumers by far are the Scandinavians. In 2002, Norwegians drank an average 10.7 kilos of coffee per person per year. Finland and Denmark were close behind with consumption around 10 kilos in each country. Dutch, Swiss, German, Austrian, Belgian, French and Italians were all ahead of the United States in coffee drinking, according to the Global Market Information Database by Euromonitor.

In 2009, in the United States daily consumption of coffee beverages among consumers remained consistent with 54 percent of the overall adult population partaking; cups-per-drinker and cups-per-capita held at the 2008 level and that of the previous four years, according to the National Coffee Association. While coffee consumption has held steady during the recession there are some consumption and purchasing trends worth noting.

Most people buy their coffee at the supermarket, according to the recent findings of Mintel, a research company. In the last five years this venue has grown 18 percent, reaching $3.4 billion this year. Another significant venue for retail sales are mass merchandisers and dollar stores. These venues grew 19 percent and reached $3.8 billion in 2010. The expectation for the immediate future is that the lower consumer confidence the greater the growth in these stores.

As people worry about the economy they migrate toward roasted coffee and other products they can brew at work and at home. If the worries deepen they are likely to seek value brands like Folgers and Maxwell House. FDMx sales of roasted coffee led overall market growth and grew 3.8 percent between June of 2009 and 2010. Folgers, part of J.M. Smucker Co. and seen by many as a strong United States brand, also had strong growth during those months. Kraft brands Maxwell House and Yuban also showed gains. 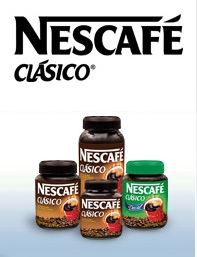 In addition to the over 45 and over 55 market segments which exhibit the largest growth (see Baby Boomers biggest coffee drinkers, Emerging Markets likely to drive future growth), another segment expected to continue exhibiting high demand is Hispanics. FDMx sales of Nescafé Clasico, sometimes sold in bilingual packages, increased by 10.9 percent during the period examined by Mintel leading researchers to conclude that bilingual packaging may drive growth in instant coffee products which they found to be very popular among Spanish-speaking Latinos. Some marketers believe coffee sellers should enhance bilingual messages and packaging for instant coffee products popular among Spanish-speaking Hispanics. Nescafé Clasico, also available in Decaf and Suave flavors, is described on the Nestlé website as “the leading coffee for Latinos in the U.S.” and “the fastest growing brand in the instant coffee category with distribution nationwide in the U.S.”

Fifty four percent of Latino Mintel survey respondents indicated they like non-sweetened instant coffee compared to 28 percent of the general population. About 70 percent of Spanish dominant Latinos (those who speak mostly or only Spanish), especially in Los Angeles, California and El Paso, Texas, like instant coffee.