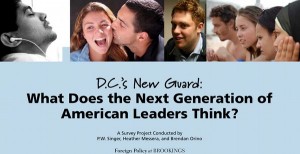 Although little information seems available about the attitudes and opinions of the up and coming generations, D.C.’s New Guard: What Does the Next Generation of American Leaders Think?, a 22-page report on the findings of a recent survey among youth with an interest in political careers, indicates this subgroup of the Millennial Generation, a large demographic group by all accounts, has its own characteristics and opinions as might be expected.

In terms of their political affiliations, 38.2 percent self identified as Democrats, 28.8 percent as Independents, and 26.4 percent as Republican. The profile is, according to the survey authors, different than the trends in the prior Generation X who grew up in the Reagan-era and exhibited more conservative attitudes than the Millennials. What the authors found most interesting was the large segment of youth leaders who remained unaffiliated with a political party even though many expressed views that might be associated with the Democratic point of view.

Want to target this group of leaders who may include future mayors, governors, and representatives through a news medium? Don’t try the evening news or late night comedy shows. While their responses to the survey indicate their source of news is traditional new organizations the evening news and late night comedy shows ranked low among them as a source of news. Thirty percent of Republican respondents preferred cable news to stay informed while Democrats and Independents consumed news from online news websites.

Who do they look up to when forming political opinions? Many of the respondents, 61 percent, said their parents were major influences. Political leaders accounted for 19 percent and media 12 percent. The survey authors concluded this aspect of the Millennials was quite different from the Baby Boomer Generation. When the Baby Boomers were young they tended to select a political view that was the opposite of that of their parents’. Celebrities and faith leaders had a relatively low political influence level among young Millennial leaders.

Assuming that the models young people admire today may influence their attitudes tomorrow, the survey authors asked what leaders from history they admired. More than one third (under 36 percent) chose a military leader or civilian leader closely associated with wartime like Franklin Delano Roosevelt, Abraham Lincoln, Dwight Eisenhower and Woodrow Wilson. The survey authors believe that is not surprising given that the United States the respondents have known to date has been at war for a majority of their lives. Fourteen percent admired a founding father such as Thomas Jefferson, James Monroe and Alexander Hamilton while 10 percent chose leaders of social change such as Martin Luther King, Jr. and Nelson Mandela. About one percent chose a religious figure such as Mother Theresa or the Prophet Mohammed as a leadership model for the 21st century.

When asked about a leader today that they admired more than 49 percent said Barack Obama, well past any other leader named. The political affiliations of those who preferred Obama as their “ideal leadership model,” were 62.8 percent  Democrats, 28.5 percent Independents and 8.7 percent Republicans. Other listed as models who received between one and five percent included John McCain (with 5.5 percent favoring him as their model leader), Al Gore, Bill Clinton, Colin Powell, Condoleezza Rice, Nelson Mandela and Hillary Clinton.

Although the survey authors did not ask about the ethnicity or cultural background of respondents (or did not share the information in the report), it is safe, based on the degree of diversity among American youth revealed by 2010 Census, to assume some degree of diversity among the respondents. It is unclear from their findings exactly what affiliations and opinions Hispanics, African Americans, Asians and others in this group of leaders may have. Now that this youth demographic group has been identified as worth watching maybe future surveys and research will reveal more about the leadership attitudes of the Millennial Generation and its diverse market segments.