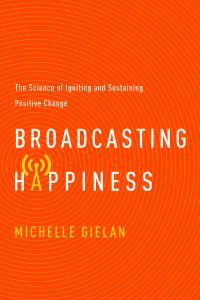 Can adopting a glass is half full instead of a glass is half empty outlook on life improve your performance at work? Can a two-minute habit transform a pessimist into an optimist? There are those who are convinced it is possible. Former journalist turned researcher and small business owner Michelle Gielan believes so much in the power of positive thinking she has made it her business. In Broadcasting Happiness The Science of Igniting and Sustaining Positive Change (BenBella Books, $25.95) Gielan discusses her affirming approach to business and journalism.

In her book, she cites corporate, academic and journalistic examples of the impact a happy attitude can have on results and in some cases profit. In one school district, she says, graduation rates rose from 44 percent to 89 percent over several years as a result of positive attitudes and related practices. A news series focused on happiness that aired during the recession garnered the highest viewer response that year, she explains. She declined to answer questions submitted by email via her publisher for this article.

One technique that can influence results is how we begin a conversation; by priming the brain with the tone we seek from the beginning we improve the likelihood of accomplishing our goal, the author says in the second chapter. Because we receive an overwhelming amount of input every second our brains struggle to pay attention to it all so turning people’s attention to the positive might allow them to avoid the paralyzing effects of the negative, she says.

It isn’t enough for an individual to maintain a positive attitude by her or himself, Gielan says. By prompting others to share your upbeat message you can multiply its effect exponentially. She believes it is possible to create contagious optimism which can shift a work or home culture from negative or neutral to positive. She suggests six elements are necessary for others to broadcast a message: motivating hidden broadcasters to share your message; raising the status of the broadcaster; emphasizing high emotions; making it easy and practical for people to share your message; including action steps.

The 275-page hardcover book published in 2015 cites sources in endnotes. It is divided into eight chapters and three main sections: Capitalize on Positivity, Overcome Stress and Negativity, and Create a Positive Ripple Effect as well as a Journalist Manifesto at the end.

Gielan is computer engineer specializing in electrical engineering and systems architecture by training. According to her biography, she is founder of the Institute for Applied Positive Research and managing partner at GoodThink. Prior to that she was anchor of two national newscasts at CBS News and correspondent for The Early Show. 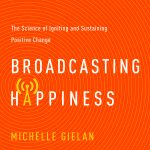