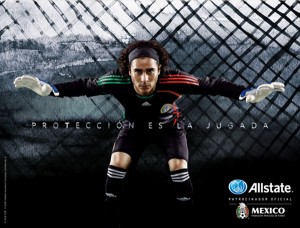 Allstate wants to win over 18 to 49 year old men who prefer to watch television in Spanish. Toward that end representatives of the Illinois based insurance company dedicated several weeks to filming (and producing) two 30-second Spanish language television commercials in Mexico City, Mexico. Scroll down to watch the two ads, Gloves and Wall, in Spanish.

Work on the ads for an undisclosed budget was the responsibility of several people from Lapiz (production), White House (editing), Absolute Post (post production), CO3 (transfer), Human (music), and Another Country (sound design). Lapiz, under the creative direction of Javier Osorio and Eduardo Cintron, led the conception and production of the TV commercials. Briton Gerard de Thame was in charge of the direction.

The commercials are airing through the World Cup and beyond on Univision, Telemundo, Galavision, Telefutura, TV Azteca, and all their affiliates as well as ESPN and its affiliates. The spots should also stream online on major Spanish language sports sites and ESPN.com.

Gloves first aired May 2010 while the Mexican National Team played in a series of friendly matches throughout the United States. Wall made its debut during the start of the World Cup on June 11, 2010.

According to an Allstate representative, the company that provides insurance products to more than 17 million households has been the exclusive sponsor of the Mexican National Team for the past four years. During that time, Allstate representatives have developed several television ads with a soccer theme including some that have featured Memo Ochoa (Francisco Guillermo Ochoa Magaña), a Mexican football goalkeeper. Although the Mexican National Team is based in Mexico every year they play friendly matches in the United States. Allstate executives hope to take advantage of the game’s popularity to expand the insurance brand among team fans.

Marketers at the insurer believe the ads have resonated well with fans of the Mexican National Team, the sport in general, and among the general Hispanic population in the United States. Allstate also developed print, radio and online advertising in support of this program, linking to its soccer communication platform: Proteccion es la jugada (Protection is our game).

As part of the campaign, Luis Roberto Alves “Zague,” a former Mexican footballer, is scheduled to twitter live from South Africa throughout the World Cup and share blog entries in an interactive website, proteccioneslajugada.com. Through the site it is possible to send messages “via the bleachers,” orchestrate team chants, customize a soccer ball, and place Memo Ochoa’s hair on personal photos.

The Allstate Financial Group, founded in 1931 as part of Sears, Roebuck & Co., sells life and supplemental accident and health insurance, annuity, banking and retirement insurance to individuals and companies through company owned and independent agencies, financial institutions and broker-dealers. According to the company website (KeyMetrics 2009), 27.4 percent of its employees are minority members divided as follows: 16.2 percent of its employees are African American, 8.3 percent are Hispanic, 4.3 percent are Asian and .4 percent are Native American. When it comes to officers and managers the company workforces is 21 percent diverse: 8.6 African American, 7 percent Hispanic, 3.6 percent Asian and .5 percent Native American. In 2009, there was one African American on the company board of directors.