College graduates most likely to marry prior to having children 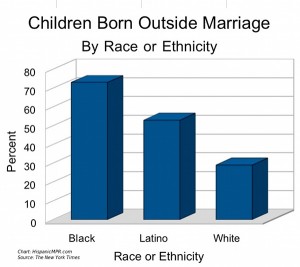 Sellers of products and services to married couples having children likely have noticed their target audience has changed significantly in the past few decades. In 2009, in the United States, although 59 percent of women married before having children when it came to younger women more than half had children out of wedlock. Also, two thirds of children were born to women under 30 years old, according to new federal data on births and marriages and Childbearing Outside of Marriage: Estimates and Trends in the United States, a research brief from Child Trends.

In the United States, although 52 percent of the out of wedlock births are to parents living together such unions are less stable than marriages; and children born to unwed mothers are more likely to be poor, fail in school and suffer from behavioral problems, according to Child Trends, a nonprofit, nonpartisan research center that studies children.

Being born to a single or unmarried mother went from being the exception 30 years ago to being common today. In 1980, the likelihood that a child would be born to unmarried parents was 18 percent; now it is 41 percent.

“It is hard to say what will happen. However, preliminary data from 2010 show a slight decline in the percentage of births occurring outside of marriage. It is possible that we have reached a plateau, or perhaps levels will continue to decline. We won’t know for several more years. Nonetheless, levels of nonmarital childbearing remain high and I don’t really expect that we will see a huge surge in marriage anytime soon. Given that many of these births occur to two parent families, to cohabiting parents, I think we should work to promote stability in cohabiting unions, as well as marriage. Additionally, we should make sure that children have access to resources from both parents,” said Elizabeth Wildsmith, research scientist, Child Trends, by email when asked about trends for the next two years.

Women college graduates resist the unwed mother trend. Increasingly, they are the most likely to marry before bearing children, according to a recent The New York Times article (see Half of Births under age 30 are by unwed).