First novel of Catalan author released in US

Jordi Punti, a writer and translator, and a contributor to the Spanish and Catalan press, was rewarded with recognition when he released his first novel. Lost Luggage (Atria Books / Marble Arch Press, $16), published in English in paperback and e-book editions in October 2013, was translated into 15 languages, and won the Spanish National Critics’ and the Catalan Booksellers prizes. Prior to this title Punti published three books of shorts stories.

In the 440-page book, Cristofol, a young Barcelona resident, is informed by the police that his father’s flat has been abandoned and its owner is missing. The man who vanished, a truck driver, left Cristofol and his mother 20 years earlier. At the apartment he had never heard about Cristofol finds a list of names belonging to his half brothers Christof, Christophe, and Christopher. He contacts them. None of them was aware that he had half siblings from a common father. None of them had seen his father in many years. 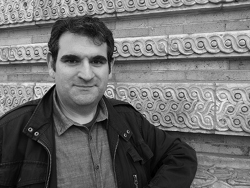 Although they live in different European cities they decide to meet for the first time. They wonder why he abandoned them and why they have similar names. In their journey to find the answers they discover a man who during 30 years of driving was able to escape the darkness of Spain under its former president Francisco Franco and to explore Europe.

Since he received a degree in Romance Philology in 1991, Punti has worked in Barcelona publishing houses, and co-directed La Flor Inversa (The Inverse Flower), a collection of medieval poetry along with Jordi Cerdà and Eduard Vilella, according to lletra.net.