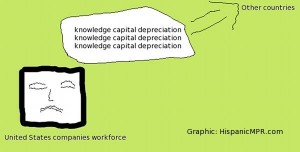 Are you marketing or selling a new product in the United States? Speed may be of the essence. For 40 years innovation has, at least in part, fueled our growth in the United States. In the 1990s, rapid innovation made it possible for our economy to grow at a quick pace and prompted the creation of new jobs while old ones were lost due to higher production efficiencies and cheap labor costs overseas. Recently, that process appears to have broken down. While the flood of jobs to developing countries continues the pace of innovation has slowed and the amount of time during which manufacturing and selling new products remain profitable within our country is shorter, according to Pinched.

Knowledge, business know-how and research and development become less valuable more quickly today than they did 15 years ago, according to economist Michael Mander (see A Massive Writedown of U.S. Knowledge Capital at innovationandgrowth.wordpress.com). Some people believe improved and inexpensive international communication and a diverse international workforce have played a prominent role in the loss.

The more people, companies and countries have access to knowledge the less valuable it becomes. As communication has improved so has the flow of information and knowledge, reducing the value of the knowledge more quickly in the countries where it was developed (often the United States and Europe) and shifting the know-how to other countries with greater efficiency than in past decades, say the experts.

Too much red tape and corporate power has dramatically decreased new inventions (see Patent attorney explores reduction of inventions in America). With fewer inventions patented and a faster rate of knowledge capital depreciation (which results from the expenditures of an organization that have led it to increase efficiency over time according to Paul Strassman at Strassman.com) the importance of our skilled scientists and business professionals has grown, these economy analysts believe. Is it possible that developing marketing plans and timelines to match the changing marketplace may make a big difference in extending the timeline of profitability and keeping knowledge capital depreciation in check?