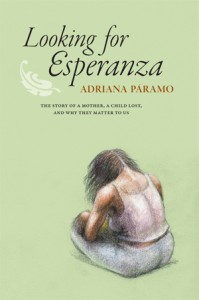 While watching the news the attention of Adriana Paramo, an author and anthropologist, was drawn to a story about an immigrant mother who had carried her dead daughter’s body with her through a tough desert journey from Mexico with her family. Perhaps because she is an immigrant herself or because the plight of others touches her the woman’s case drew Paramo. She spent 18 months searching for Esperanza, the woman in the news, immersing herself in the world of undocumented workers in the small town where she thought Esperanza might live.

Across Florida, in vegetable fields, citrus groves, ferneries, and packing houses, she encountered “an underground subculture of hungry undocumented women, a hidden world of wage slaves, a microcosm of false names, false Social Security numbers, and false hopes.” During that time, she met many people and heard about many unfortunate women and their sorrow filled stories.

She stopped writing following the death of her mother due to her extended bereavement. Eight years after she began her search for Esperanza Looking for Esperanza: The Story of a Mother, a Child Lost, and Why They Matter to Us (Benu Press, $24.95), a 142-page softcover book about her experience, was published. The book chronicles the plight of undocumented women living in Florida who took great risks hoping for a better life for those they love. 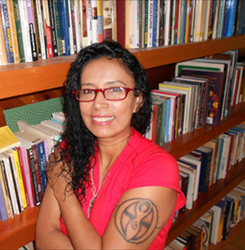 “Although I write almost exclusively about women, I hope my readership is comprised by both men and women. Anyone with a beating heart, anyone with a shred of humanity in them, anyone with hope for a world where justice and equality rule our immigration policies and our relationship with food, is a good target for my book,” said Paramo in response to a question about the target audience for her book.

She believes the book “has brought awareness to the appalling living and working conditions of our undocumented farmworkers” and has also “created a sort or urgency, a need for the reader to say ‘what can we do?’ or ‘how can we change this?’” Two college professors plan to use the book in their classroom.

“My biggest challenge was to accept my limitations as an anthropologist. As a social scientist all I could do was to observe, document and report. With each story told to me, I wanted to do something tangible and immediate; I wanted to have the power to find them better housing, better food, to give them access to the same resources I have access to. It was very hard to realize and accept my own helplessness,” said Paramo when asked about challenges and rewards of writing the book. “To have the book published. Holding the book in my hands makes me feel that I have done something relevant, that Paulina, Laura, Griselda, Rosa, Cristina and Esperanza are no longer faceless, voiceless wetbacks, but women like me.”

Paramo, a non fiction writer born and raised in Colombia, won the 2011 Benu Press Award for Social Justice for this book. She is a resident of Florida. 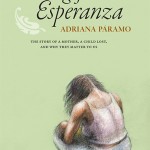