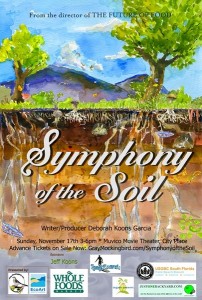 Symphony of the Soil movie poster – click to enlarge

It took filmmaker Deborah Koons Garcia four years and much work to complete Symphony of the Soil, a 104-minute documentary film about the complexity and mystery of soil. Filmed on four continents and featuring the insights of dozens of experts including some of the world’s most esteemed soil scientists, farmers and activists, the insightful film portrays soil as an essential element for our survival. Scroll down to the watch film trailer.

Relying on striking cinematography by John Chater, and Nancy Schiesari in the United Kingdom, combined with art and animation the director illustrates the pivotal role of soil in our world. Experts on screen expound the importance of good soil in solving some of the planet’s most vexing environmental and healthy food supply problems.

The first third of the documentary focuses on soil science. How soil is formed and its life cycle as well as the physical components of soil, the soil orders, the microorganisms that cycle nutrients, soil and plants, and the interrelationship of the many members of the soil community, including humans.

The second third of the film focuses on the relationship between people and soil, especially human’s use of soil for agriculture. The third section explores soil and climate change, water use, health and other topics that support the case for treating soil with care such as the return to small scale organic farming as a viable solution to the problems of resource depletion, climate change and the end of oil; and to the importance of seeds and seed saving in India.

Symphony of the Soil is the second major production of Lily Films. In it the film producers strive to raise consciousness about how people think and treat soil, seeking that they realize that destructive land use practices degrade and poison the soil and that society should take responsibility for protecting and improving soil for the generations to come.

It was filmed on four continents, in six countries, the United States, England, Wales, India, Egypt, and Norway. Some of the locations include, in the United States, Oregon, Washington, California, New York, West Virginia, Kansas, Iowa, Vermont, Hawaii; in the United Kingdom, Devon, Hastings, Bristol, Wales, and Ceredigion; in India, Punjab, Uttarakhand, Rajasthan; in Egypt, Cairo and Aswan; and in Norway, Tromso.

Koons Garcia, a bay area filmmaker, has made fiction, educational and documentary films. For the last ten years, she has focused on films about agriculture, the food system and environmental issues. Lily Films, her film production company based in Mill Valley, California, funded the lion’s share of the production costs for the documentary.