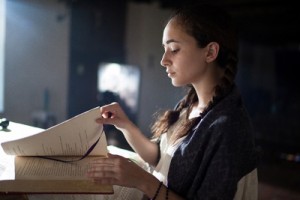 Re-enactment photo: an actress portrays Apolinaria Lorenzana, a young orphan brought into a Spanish settlement in California in 1811*

Latin Americans, a three-part, six-hour documentary series said to “chronicle the rich and varied history and experiences of Latinos, who have helped shape the United States over the last 500-plus years,” is expected to air nationally on PBS this fall. Actor Benjamin Bratt will narrate, Joseph Julián González will compose the musical score, and Lila Downs will be the featured artist for the series, performing the closing song. The program features interviews with one hundred Latinos in politics, business and pop culture including Rita Moreno, Dolores Huerta, Linda Chávez, and Gloria Estefan.

Other interview subjects are María Elena Salinas, co-anchor of Noticiero Univision; Juan Gonzalez, author of Harvest of Empire: A History of Latinos in America and co-founder of the Young Lords Organization, a Puerto Rican nationalist movement; Rep. Charles Gonzalez, a retired Texas congressman who from 1999-2012 served in the House of Representatives for the district that his father, Henry B. Gonzalez, represented for nearly four decades; and Herman Badillo, the Bronx politician who, in 1970, became the first Puerto Rican elected to the House of Representatives and ran six times for mayor of New York.

The staff completed the interviews and other shooting and are now finishing post-production, including final editing, narration recording, music scoring, audio mixing, color correction and packaging. Between pre-production, production and post-production, the entire series will take 18 months to complete. A spokesperson indicated via email, “… we expect to have our finished series in March 2013, ahead of the Fall 2013 broadcast premiere.”

The six segments of the series are in chronological order: Strangers in Their Own Land, from 1500-1880; The Pull and the Push, between 1880 and the 1940s; War and Peace, from the World War II years; The New Latinos, from the post-World War II years into the early 1960s; Pride and Prejudice; and Peril and Promise, over the past 30 years. 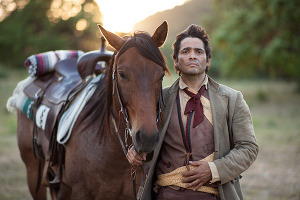 Re-enactment photo: An actor portrays Juan Seguín, a political and military figure of the Texas Revolution and Republic of Texas.**

More than two dozen people worked on the series, a production team for each of the six hours, who shot in various places around the country; a production team with Bosch and Company, Inc. in Boston; and the team at WETA Washington, D.C. There are re-enactments in the two first hours of the series, depicting scenes with historical characters such as Apolinaria Lorenzana and Juan Seguín, figures from the 19th Century.

The scenes for Lorenzana, a young orphan who Spanish representatives brought into the Spanish settlement in California in 1811, were shot on-location at Mission San Francisco de la Espada (Espada Mission) in San Antonio, Texas. The scenes for Seguín, a political and military figure of the Texas Revolution and Republic of Texas, were shot on-location at Northrup Pipe Creek Ranch in Lakehills, Texas. Other historic characters brought to life through dramatic re-enactments include Mariano Guadalupe Vallejo, a Californian military commander, politician, and rancher; and Juan Salvador Villasenor, whose family fled the Mexican Revolution. The production team shot new footage for the final sixth hour of the series, of modern stories.

Plans are for the series to be accompanied by a bilingual public education campaign, a bilingual website with user-generated digital content, social media platforms and the development of a school-based curriculum. A companion book by Ray Suarez, senior correspondent, PBS Newshour, will be published by Celebra, and is expected to be released in conjunction with the broadcast premiere.