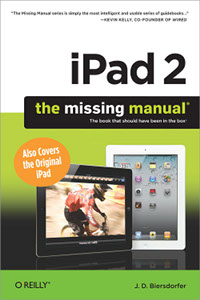 I bought my iPad as a last minute replacement for a netbook that, after less than a year of service, died two days before I was due to go on an overseas trip. I wish iPad 2 The Missing Manual by J.D. Biersdorfer (O’Reilly Media $24.99) had been available then. It would have saved me several missteps. Eventually I got the hang of the basic features and it was easier than it might have been for me because, as the salesman at the Apple store explained, the iPad is like an iPhone but bigger.

As the iPad revolution continues with the new iPad 2 introduced earlier this year more users are joining the tens of thousands, or perhaps hundreds of thousands, of fans of the thin and light weight tablet. Simple functions like turning the iPad on and off can be important. I discovered before reading the book for example, that if you don’t turn off the iPad completely and it runs out of battery power it looses the stored data and apps, requiring a recharge and a reloading of data and apps. If this happens during a business meeting or trip it can be inconvenient.

Biersdorfer’s book is filled with color photos and user friendly explanations as well as Notes and Tips. Some of the comments have a touch of humor like one about the description of the screen’s fingerprint resistant oleophobic coating seeming to describe a psychiatric condition or a fear of butter substitutes. In relation to video capability, I liked the tip about the iPad playing hi-def video at the lowest resolution available and the list of video conversion programs on page 243.

The 313-page book is divided into sixteen chapters and two appendices: Get to Know Your iPad; Interact with Your iPad; Get Online; Surf the Web; Keep in Touch with Email; Use the iPad’s Built-in Apps; Shop the App Store; Read iBooks and ePeriodicals; Play Games; Get Productive with iWork; Organize and Sync Media Files with iTunes; Master iTunes; Play Music and Other Audio; Watch and Edit Videos; View, Edit and Manage Photos; and Sync Up with MobilMe. The appendices address troubleshooting and iPad settings. 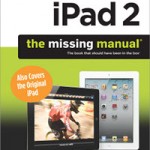