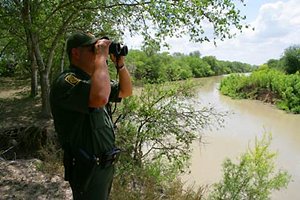 A CBP Border Patrol agent scans the area with binoculars

Crouching in the bushes, silently hiding from men in uniforms with search lights a group of 20 people listen to a loud warning in Spanish with a thick American accent. Someone runs but he is caught, dropped to the ground and interrogated before being “deported.” The remaining “immigrants” wait a few minutes before crawling under the fence into the darkness and freedom.

Although it is meant to simulate hundreds or thousands of real scenes that take place across the 2,000 mile border that divides the two countries, the activity really takes place 500 miles south of the United States-Mexico border in the village of El Alberto. The people participating in the night time event are really curious travelers to Mexico wanting a glimpse of what undocumented immigrants from Mexico experience when attempting to cross north of the United States-Mexico border in search of a better life.

A group from the small Hnahnu Indian community of El Alberto in the Mezquital valley makes this activity available to tourists for a fee. The Hnahnu representatives that play smugglers, border patrol agents, deportees and other performers are volunteers. This part of Mexico is, according to a recent article in Guardian.co.uk, is known for its poverty, water contamination, and many immigrants to the United States. Increased border security and the worsening recession have made it increasingly difficult to find jobs for new arrivals to the United States so leaders of El Alberto have found a way to generate revenue and provide tourist entertainment.

The “show” is led by a representative of El Alberto in the role of a coyote or smuggler before the tourists head down to the river bank while border patrol car siren wails in the background. If the visitors are in good physical shape they may continue another six hours moving from one side of the river to the other constantly. Others may complete the experience in one hour. Apparently, even the simplest version includes a walk along a high wall (30 feet) without exit in sight.