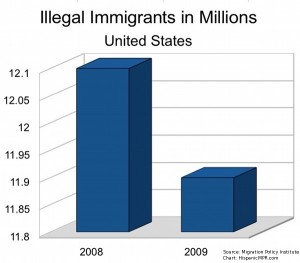 As the recession hit the United States it also affected employment including employment of the undocumented. In spite of all the controversy around Arizona’s anti illegal immigrant legislation and federal troops heading to our southern borders there are fewer illegal immigrants in our country now than in recent years.

According to the Migration Policy Institute, a Washington, DC organization, the number of foreigners illegally in the United States is down from an estimated 12.1 million in July 2008, to 11.9 million a year later, and less now. Another telltale indicator that immigrants, like everyone else, have been affected negatively by the economy is the drop in remittances from the United States south. The Institute website sites anecdotal evidence that some Mexican families have sent money to their relatives in the Unites States to help them. Even the demand for visas was down compared to previous years, according to visa statistics sited by the Institute.

Because many immigrants share demographic characteristics with the groups most likely to be affected by the recession such as youths, the uneducated, and new members of labor force often they have been more likely to be victims of the recession; and foreign-born workers are also overrepresented in the construction, manufacturing, leisure and hospitality, and support and personal services industries which have been especially affected by the downturn in the economy, according to the Institute.