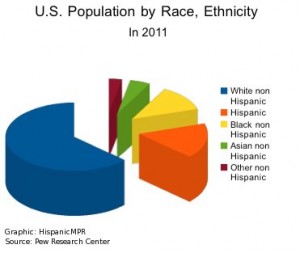 U.S. Population by Race, Ethnicity in 2011 – click to enlarge

In 2011, Hispanics represented 16.7 percent of the United States population and 23 percent of births. In other words, Latinos represented one sixth of the population and almost one quarter of all births. Those estimates, compiled by the Pew Research Center, include undocumented immigrants said to be as many as 12 million and 80 percent of which are thought to be Latinos. Two thirds of Hispanics can be found in just five states: California, Florida, Illinois, New York and Texas, according to analysis of U.S. Census and American Community Survey data by the Pew Research Center.

Also, 13 million Hispanics, 25.9 percent of the Latino population, are thought to live in poverty and 22 percent receive food stamps; placing second to last on those lists. African Americans at 27.9 percent in poverty and 28 percent on food stamps were the only ethnic group with more alarming conditions. At the same time, Latinos had the highest percent of people without health insurance, 30 percent, compared to 10.8 percent for non Hispanic whites, 15.4 percent for Asians and 18.6 percent for blacks.