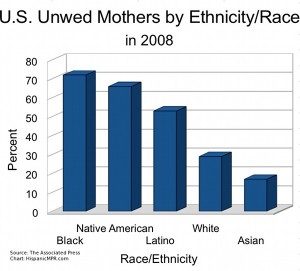 According to a recent Associated Press article (Rate of unmarried mothers reaches 72% among blacks), the offspring of unmarried mothers of any race are more likely than others to under perform in school, be imprisoned, use drugs, live in poverty as adults and have children while unmarried. In spite of the grim statistics 41 percent of mothers in the United States in 2008 were unmarried.

Social attitudes toward marriage have changed in recent generations and being a single mother is much less frowned upon by society than in past decades. As women have become better able to make a living on their own their need to be married and have a husband in their lives for purely financial reasons has decreased significantly even if their earning power is lower than that of their male peers in many professions according to the Bureau of Labor Statistics (see Earning power for women stalls as pay scale still lags behind men at NJ.com).

At the same time, it is possible that some of the mothers in the Associated Press article statistics have significant others helping to raise the newborn. Some may find the high percent of unmarried mothers among historically Catholic Latinos surprising.

In some cases they make have a life partner but didn’t marry because they couldn’t afford the cost of a big wedding in the country of origin, according to an article about unmarried Hispanic mothers in Tennessee. Some even may be in a relationship where one of the partners may not be able to marry because they already have a spouse in their country of origin. Or they may be mimicking United States living together trends as part of the acculturation process.