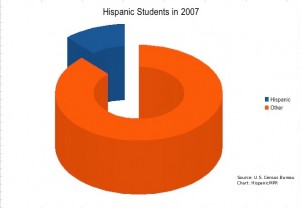 In 2007, Hispanic students represented one fifth (12 percent) of kindergarten through high school students as well as full-time undergraduate and graduate college students. The number of college students represents an increase of 2 percent from 10 percent in 2006, according to U.S. Census Bureau tables released last week. These numbers are not surprising since Hispanics, even by conservative estimates, comprise 15 percent of the nation’s population.

The increase in Latino students is considered part of a trend of an increasing wave of emerging market or minority students across schools and universities nationwide. In 2007, there were twice as many minority (Hispanics, blacks, Asian-Americans) students in grades K-12 than 30 years earlier. Pre-college minority students in that part of the country exceeded mainstream students. By 2023, minority children are projected to be the largest percentage of children in the United States population.

Immigration and high birth rates among Latinos combined with shrinking birthrates among non Hispanic whites are resulting in changes in the school systems, especially in western states such as Arizona, California, and Nevada where 37 percent of students is Hispanic.