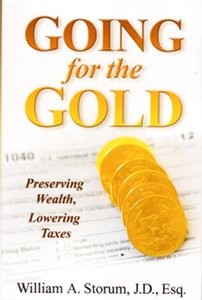 Going for the Gold

The more debt our country accumulates the more money it needs to pay the bills. The economy has been poor and the government’s solution increasingly has been to print new money with no collateral to back it up, leading many to believe the situation will worsen in the coming years. The deterioration will force our government to offer less to its citizens and charge them more in the form of taxes to pay the accumulated and growing debt, says William A. Storum, J.D., author, Going for the Gold Preserving Wealth, Lowering Taxes (Book Publishers Network, $21.95).

As that happens our currency will loose its worth to inflation; so will other so called hard currencies that have traditionally been considered safe havens, the author says in the book. He believes one way to protect our assets from the devastating losses such shifts would bring is to invest in gold. Given the limited supply of the precious metal many rely on it for the possible proverbial rainy day when the economy collapses and paper money becomes worthless.

Storum points to many examples of economies falling on difficult times and countries with worthless currencies. He illustrates a period in our history in the last century when our government made owning gold by private citizens illegal, forcing people to sell their gold to the government and earning a profit on the difference a year later. He suggests strategies to accumulate gold bullion and invest in gold stocks and instruments in tax smart ways in order to safeguard our savings in case financial disaster strikes.

The 307-page softcover book was published in 2014. The author is an orchardist in California. He has inactive California Bar Association and California Board of Accountancy inactive licenses. There was no contact information on his book website. 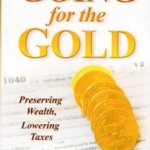