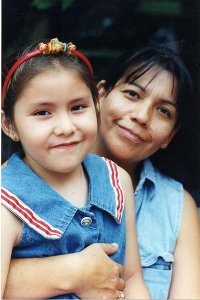 A mother and her daughter enjoy an embrace

While the majority of the native born, 78 percent, was White only 46 percent of the foreign born self reported their race as White. The second largest racial group among the foreign born was Asian, 23 percent; and Some Other Race was the final group with 21 percent. Looking at it another way, the race with the highest proportion of foreign born was Asian with 67 percent, followed by Some Other Race (43 percent), and Native Hawaiian and Other Pacific Islander (24 percent).

Foreign born Mexicans represented the largest subgroup among the foreign born (see Mexico remains top country of origin of foreign born); they reported 53 percent White and 45 Some Other Race. That represents a contrast with Cubans which reported 87 percent White; and people born in Vietnam (99 percent), China and Korea (98 percent), the Philippines (97 percent) and India (94 percent) who reported Asian race.

This data is based on Race and Hispanic Origin of the Foreign-Born Population in the United States: 2007, a report by Elizabeth M. Grieco of the United States Census Bureau released last week.