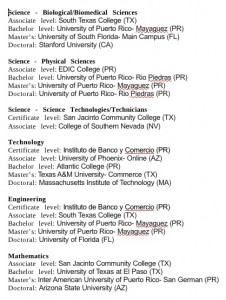 “This analysis is straightforward: we know where Latinos are earning their degrees in STEM and we know what some of these institutions are doing, with intentionality, to improve Latino success in STEM fields,” said Deborah Santiago, author of the report and co-founder, Excelencia in Education. “What we need to determine now is whether more institutions and more employers will seize the opportunity to educate and employ more Latinos in professional STEM fields.”

In 2011, Latinos in the STEM workforce were more likely to be in lower paying service occupations such as electrical, electronics, and electromechanical assemblers, telecommunications line installers and repairers, and aircraft mechanics and service technicians rather than better paid professional occupations such architectural and engineering managers and computer and information systems managers.

Since the average age of Hispanics is lower than that of the general population and there is a high number of Latinos entering the workforce the findings are significant. The Executive Summary of the report indicates: “Given the relative youth of the Latino population relative to the aging of the u.s. population overall, supporting the increased growth of Latinos with postsecondary credentials in sTeM is critical to meeting the projected workforce needs of the nation by 2020.”

In 2009 to 2010, the top 25 institutions awarding undergraduate degrees or certificates to Latinos in STEM were in Texas, Florida, California, Arizona, Illinois, New Mexico and Puerto Rico. That same year, 60 percent of degrees conferred to Latinos in the science and related files were bachelor degrees, making those students most likely to enter service occupations in their chosen fields.