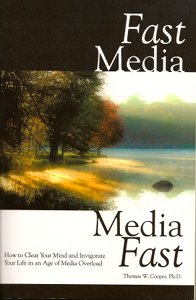 In the United States, the average household consumes eight hours or more a day of television plus web surfing, texting, social media and email, according to a recently published book*. Thomas W. Cooper, Ph.D., a specialist in media and culture, thinks people today rely too much on outside influences they receive from media and marketing messages. He advises reconnecting with others and being aware of media overload. In his most recent book, *Fast Media, Media Fast: How to clear your mind and invigorate your life in an age of media overload* (Gaeta Press, $19.95), published this year, he discusses media responsibility.

The idea, he explains in the Introduction, is to be an active participant instead of a viewer; to be a creator rather than a consumer. By abstaining from consuming media he seeks a rebirth of sorts that may allow him to get in touch with his creative side again. He invites readers to consider the idea of a temporary media fast as he has been doing periodically since 1989. At the end of the fast he, and those readers who follow his example, can choose how much media to introduce back into his life, how often, of what kind, for what purpose and so on.

The 225-page paperback book is divided into ten chapters and four parts: Taking a Personal Media Fast or Diet, Learning from the Fast, Group Fasting and The Ultimate Choice. It also includes two appendices, Personal Fasting and Group Fasting.

Cooper is professor of Visual and Media Arts at Boston’s Emerson College. Before joining the faculty at Emerson, Cooper taught at Harvard University and University of Hawaii. He is also speechwriter for Jochen Zeitz, chief executive officer, Puma. Cooper, a resident of Swampscott, Massachusetts, is the author or co-author of six previous books and one hundred academic and professional articles on media ethics and related topics. 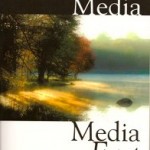