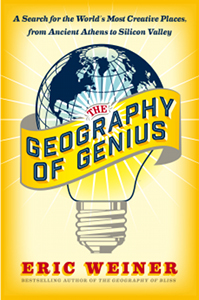 Travel enthusiast and journalist Eric Weiner has become convinced there are clusters of geniuses around the world. The connection between our surroundings and our most innovative ideas, according to him, is notable in the present day and throughout history. In The Geography of Genius (Simon and Schuster, $26.95), a hardcover book published this year he explains what he has discovered during his travels. The book required four years of effort from idea to publication.

But, who is a genius? Weiner defines the term, “A genius is not simply someone with a high IQ, a know-it-all. A genius is a see-it-all. That is, someone who makes a conceptual leap and, in doing so, produces something useful or beautiful.”

When asked by email who might want to read his book he said, “Anyone interested in creativity and innovation. Or history, for that matter. Or just a good read. I pride myself on taking complex subjects, like genius, and simplifying them without over simplifying them.”

As to w hy he believes creativity begins at home, the author said,

“If creative genius is a function of place, as I argue it is, then there is no more important place than home. It is where we learn how to interact with the world. As parents, this is a big responsibility. Our children learn more about creativity by simply being a part of a family than they do from all of the ‘creativity exercises’ combined.” 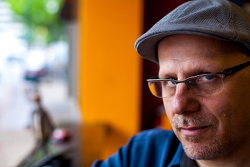 As to what he means when he says creativity is a relationship that unfolds at the intersection of person and place, he said,
”
We tend to think of creativity as taking place in isolation. The myth of the lone genius is the best example of this, but it is just that, a myth, Creativity always takes place within a certain context. (and a certain time.) Freud’s radical theories about the human mind, for instance, could only have taken place in Vienna of 1900. The place, and time, were ripe for his ideas. Without this ripeness, even the most brilliant idea will die on the vine.”

For those who want to foster geniuses what are the essential elements?

“Places that are diverse–not only ethnically but also intellectually–are the most creative,” the author said. “They are like a rich and flourishing rain forest, as opposed to a desert. We need tolerance but we also need discernment. Not all ideas are good ones. Creative people don’t get attached to the bad ones. They are willing to ‘kill their darlings’ and move on. A certain degree of disorder, of chaos, even, is essential for a creative place and a creative person. Chaos is the bridge between old orders and new ones. Innovative people embrace it.”

The biggest challenge to writing the book was finding the right balance, between depth and accessibility, humor and seriousness, personal observations and universal truths, he explained.

“The greatest reward is when I receive an email from an appreciative reader who tells me that my book changed her life, in some way, large or small,” he said when asked what was the greatest reward to writing his book. “Ideally, I managed to get her to think about a familiar topic in a a fresh way, That’s what it’s all about.”

Weiner writes a regular column for BBC Travel. Prior to this book he wrote three books including, The Geography of Bliss, a The New York Times bestseller translated into 20 languages. Weiner is the recipient of the Borders Original Voices Award, and a finalist for the Barnes & Noble Discover Award. As a long-time foreign correspondent for National Public Radio, he reported from more than 30 nations, from Iraq to Indonesia, covering some of the major international events of recent times. His next book, still untitled, will be about practical philosophy. 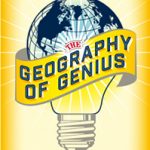