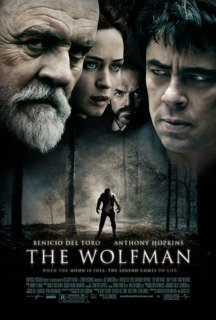 I know, I know another wolfman movie. How many wolfman movies can they make? And yet, this one, The Wolfman, due out February 12, has been on my list of maybes since I first caught a trailer a couple of months ago. If nothing else the cast intrigued me. Two award winners, Anthony Hopkins and Benicio Del Toro, star in the movie as well as Emily Blunt (who recently played young Victoria, the British monarch) and Hugo Weaving (seen in Lord of the Rings and The Matrix). Scroll down to watch trailers.

In the film, according to promotional materials (no screener was provided by the studio) Lawrence Talbot (Del Toro), a nobleman, returns to his family estate to search for his missing brother at the behest of his brother’s fiancee (Blunt). After reuniting with his estranged father (Anthony Hopkins) he finds out “something” has been killing local villagers and drawn Frederick George Aberline (Weaving), a suspicious Scotland Yard inspector to investigate. 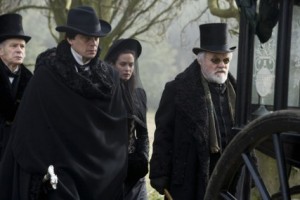 Of course, nothing is as simple as it seems. In his search for his brother and a way to protect the villagers from danger he is attacked. Later he makes a startling discovery about himself. Any guess what that might be?

Released by Universal Pictures the film was directed by Joe Johnston (Raiders of the Lost Ark) and produced by Scott Stuber, Benicio Del Toro, Rick Yorn, and Sean Daniel. Other noteworthy contributors include six-time Academy Award-winning creature effects designer Rick Baker (Del Toro was fitted with a prosthetic chin, cragged dentures with sharp canines, a real hair wig and a beard that was applied with bits of follicles glued to his face; the wolf suit was made with yak hair, crepe wool and leg extensions); a bass baritone opera singer for the perfect wolf howl; and triple Oscar-winning costume designer Milena Canonero.