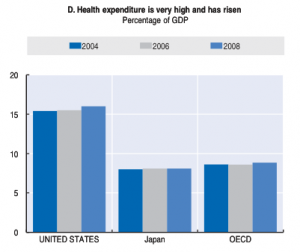 A new Organization for Economic Co-operation and Development (OECD) 227-page report, Economic Policy Reforms Going for Growth, highlights issues relating to growth among member, and some non member countries. The report outlines salient issues and suggested recommendations for individual countries including the United States. While the organization’s researchers concluded our GDP (gross domestic product) is one of the highest among OECD members thanks to high labor productivity they found relative labor utilization had dropped. They noted the benefits of recent health care and financial sector changes while calling for additional changes they believe to be necessary especially in education, health care and tax reform.

The first priority the analysts drew attention to was education, explaining that in spite of high per pupil spending United States student scores were below the OECD average in the international student test (PISA). The report calls for an improvement in teacher education and development in order to increase student achievement; and suggests the United States make schools accountable for student progress. In light of the 2010 Census numbers that point to minority markets as the main source of demographic growth in the country the importance of education among minority students is likely waxing. 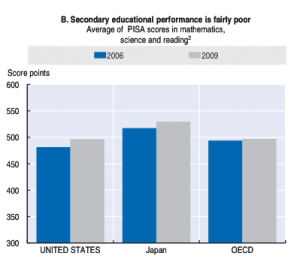 Health care expenses are already high and continue rising at a steady pace, according to the report released last week. The researchers concluded that while last year’s health care reform law reduced long term expenditures it is unclear how it will affect health care. They recommend the adoption of Medicare provider reforms after pilot testing; and that the health tax exclusion (i.e. the exclusion from taxable income and payroll tax of compensation in the form of health insurance cover) be limited beyond what was planned to reduce incentives for people to buy health plans with little cost sharing.

The report recommends the United States broaden the tax base by “reducing the value of the mortgage-interest deduction on owner-occupied housing and limiting the health tax exclusion.” The analysts also think a move away from personal income towards consumption-based taxes such as a VAT is worth pursuing. Other recommendations included the reduction of agricultural subsidies and the adoption of policies that promote social mobility.

The OECD, about to turn 50, provides a forum for member governments to compare policy experiences, “seek answers to common problems, identify good practice and coordinate domestic and international policies.”