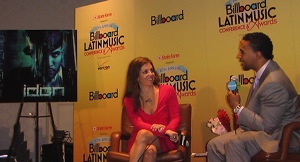 Interviewer Leila Cobo and Don Omar at this year

The music industry highpoint of this year’s conference was a full question and answer session with Puerto Rican William Omar Ladron, known to fans as Don Omar, who gave attendees a first look at the video of the first single “Virtual Diva” from his new studio album, Idon. He talked about new ways of reaching his fans, new business models that are being put to the test and content he plans to make available to fans who buy one of his CD’s.

One of the bonuses his fans will receive will be a new song featuring Daddy Yankee, a fellow reggaeton performer he used to have a long standing feud with. Don Omar spoke about his acting debut role in the new Fast & Furious movie and his plans to retire in five years and run his music record label, Orfanato Music Group. During the Billboard Awards, Daddy Yankee received the Spirit Of Hope Award for his Corazon Guerrero Foundation ( Warrior Heart Foundation) whose mission is to help troubled and under served youth.

The three-day event ended with Voz Latina, a day long conference that catered to marketers and companies aiming to reach Hispanic consumers. The highlight of the Voz Latina event was a presentation by Jacqueline Hernandez, chief operating officer of Telemundo Communications Group and the day’s keynote speaker. She spoke on the best way for companies to tap into what she called “crucial Hispanic market” by using integrated advertising solutions, innovative models and success stories to help marketers and advertisers achieve their financial goals. Other panels and topics covered Spanish- Language content online, Interactive strategies to reach your target audience, Who wears the pants: The influential consumer, Tecate Case Study: growing in English by speaking in Spanish, and How to market in a recession.