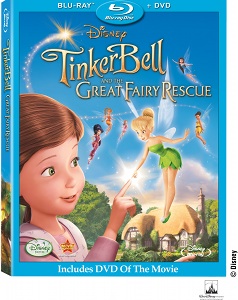 Early this year Walt Disney Studios released Tinker Bell and the Great Fairy Rescue, a 77-minute animated film in English, Spanish and French. The original movie was released in late September 2010 in a blu-ray and DVD combo pack. The Spanish version of the film is narrated by Mexican telenovela actress Dominika Paleta. Additionally, Mexican actress and singer Iran Castillo recorded songs for the film. Scroll down to watch video clips in English and Spanish of Tinker Bell and the Great Fairy Rescue.

Tinker Bell and the Great Fairy Rescue is about the famous fairy’s first encounter with a human, a little girl in the English countryside. The story takes place while Lizzy and her father, an academic type, are in the country. The young girl is a fan of fairies and of course her father discounts them as the subject of fiction. After a slightly bumpy first meeting Lizzy and Tink, as she is called by her friends, develop a special bond. A misunderstanding leads her friends to believe the blond fairy is in danger and they mount a rescue in the midst of a summer shower, a difficult time for fairies because when their wings get wet they cannot fly. After a few adventures all ends well. 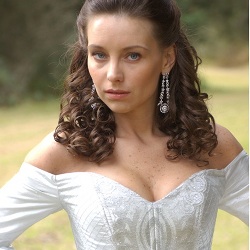 Dominika Paleta Paciorek de Ibarra (born October 23, 1972, in Kraków, Poland) is a Polish-Mexican actress. She is the daughter of a Polish violinist Zbigniew Paleta and art teacher Barbara Paciorek Paleta, and the sister of actress Ludwika Paleta.

Produced by DisneyToon Studios the film is priced at $29.99 DVD and $39.99 for the Blu-ray Combo Pack. The Disney Fairies franchise was built around the popularity of Tinker Bell. Disney also introduced Tinker Bell’s fairy friends Fawn, Iridessa, Rosetta and Silvermist. The billion dollar franchise boasts a thriving publishing and lifestyle merchandising program.

The website, DisneyFairies.com, is available in more than 20 territories across North America, Latin America, and Asia Pacific. Following the success of Walt Disney Pictures Tinker Bell on Disney Blu-ray and hi-def DVD, Disney released Tinker Bell and the Lost Treasure in 2009 as the second title in the series.