Debt to growth ratios and their impact on business 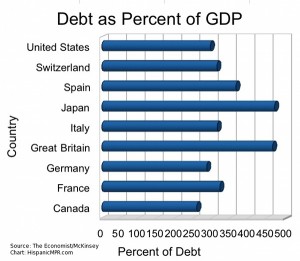 These days everybody is talking or thinking about debt. The debt of the United States is a concern for many as our country falls deeper into debt to pay off wars and save banks, mortgage companies, car makers and the like from supposed failure. On the other side of the pond European nations like Greece, Portugal, Spain, Italy, and Ireland have been in the news lately due to their precarious debt related status.

The debt of nations is but one part of the problem. Across the west companies and individuals have over extended themselves, borrowing, some believe irresponsibly, in search of ever higher returns in the case of greedy companies and investors. Consumers have gotten into debt to buy bigger cars, houses, trips and some of the many trappings of today’s consumer driven society.

According to a recent an article in The Economist relying on data from the McKinsey Global Institute Ireland and Iceland approached the debt limit of eight and as much as ten times their gross domestic product (GDP). They are the the most noteworthy but not the only ones.

British bank debt as it relates to the country’s economy is significant as is the level of debt of corporations in Spain. The relationship between public and private sectors and debt issues is complex. If the government is needed to hold up companies with too much debt it will have an impact on countries with economies that appear healthy or less at risk than that of their neighbors.

Among countries with high debt to GDP ratios and a worsening outstanding debt compared to economic growth according to the article, Spain has surpassed Greece as the country in the worst position.

What does this mean to the average person in North America and Europe? Debt has caught up with governments, companies and consumers. Things are changing. No spending or cautious spending has replaced over-the-top spending. But astute observers say the many decades of living now with the promise to pay later will have a long term effect. Government promises and private sector conservatism now aren’t enough given that governments are having to come to the rescue of private sector behemoths and in many instances the countries themselves are in turbulent economic waters.

At the same time North America and many nations in Europe have large aging populations in varying proximity to their retirement years. That will mean fewer productive people in the workforce and more retirement dollars and healthcare dollars draining the system during belt tightening times. In all Organization for Economic Cooperation and Development (OECD) countries total spending on healthcare is rising faster than economic growth, causing the average ratio of health spending to GDP to rise 7.8 percent in 2000 to 9 percent in 2008. The causes behind the rising health spending, technological change, population expectations and population aging, are expected to continue to drive costs higher in the future.

In some countries the falling GDP and rising healthcare costs led to a marked increase in the ratio of health spending to GDP. For example, in Ireland, the percentage of GDP assigned to health increased from 7.5 percent in 2007 to 8.7 percent the following year while in Spain the increase was from 8.4 percent to 9 percent for the same years. In 2008, the United States spent $7,538 per person on health more than double the $3,000 average of all OECD countries. Although Norway and Switzerland, the next generous with healthcare budgets, spent 50 percent more than the OECD average.

The solution, some believe, is to grow economies while reducing spending. How will social benefit heavy societies like those in western Europe deal with growth requirements and the debt burden? Will they cut back healthcare, social and retirement benefits?

Entrepreneurs, an important source of future intellectual and financial wealth, may struggle since more than half of all new firms rely on debt finance, according to The Economist. Forward looking analysts indicate that to survive businesses will have to adapt to the economic situation and new mindset. In an ever tighter corporate environment with increased oversight and fewer entrepreneurial windows, it is likely marketers too will need to adjust to the new reality, demonstrating their worth with measurable results.