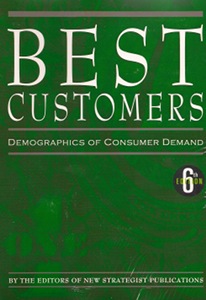 Marketers wanting to prepare for trends such as the Baby Boomer generation and the rise of ethnic emerging markets like the Asian, black and Hispanic segments, which are estimated to account for one of every five dollars of purchases in America, may be interested in the detailed information about the products and services consumers bought in past years outlined in Best Customers: Demographics of Consumer Demand (New Strategist Publications, $89.95).

The 775-page softcover book breaks down purchases and spending patterns by the demographic characteristics of households based on data from the Bureau of Labor Statistics’ 2007 Consumer Expenditure Survey. The source of the previously unpublished data is surveys of household spending. The time lag between the data collection and the publication of the book, 2009, is about two years.

The information in the book was originally gathered by the Census Bureau to allow the federal government to track prices. Two groups of 7,000 households (technically called consumer units) each in 91 areas of the country provide the data through two different surveys which are thought to cover 95 percent of expenditures. It is not clear if undocumented residents are included in the survey. Other sources of similar data collection indicate the Consumer Report Survey data is lower than actual except for: rent, fuel, telephone service, furniture, transportation and personal care services. 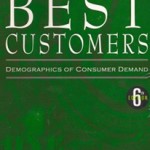