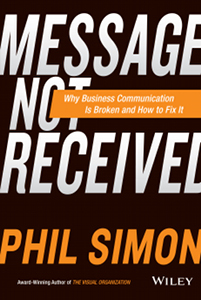 We often blame misunderstanding across cultures and languages on communication. Even among speakers of the same language sometimes there are formidable barriers. Cultural differences, abbreviated messages in limited length media such as emails and social media can lead to truncated or unclear messages. Such communications issues and at times failures represent business costs. The McKinsey Global Institute report estimate for the cost of bad communication is nearly $1 trillion (referenced in Chapter 4 of Message Not Received).

Phil Simon, who specializes in technology and has authored several books, is convinced communication within businesses is not working properly. In Message Not Received Why Business Communication Is Broken and How to Fix It (Wiley, $35), a 236-page hardcover book published this year, he explains his concerns and offers solutions.

In Chapter 4, he says that although he considers emails indispensable there are issues related to that type of message that users are often unaware of, such as its lack of nuances and emotional depth. Because of that they are sometimes not the most appropriate method for complex discussions. He points out that emails may also be the cause of legal concerns, foster internal competition, be too copious to process and manage, and have poor search functions.

“I knew that e-mail fails us on several levels, but I was unaware of the extent of the problem,” Simon said by email. “As I discuss in the book, e-mail gives the false appearance of one-to-one, in-person communication. For instance, consider a 2006 series of studies by two psychologists, Justin Kruger, PhD of New York University and Nicholas Epley of the University of Chicago. In short, Kruger and Epley wanted to determine if people were as good as they thought they were at discerning the subtext of a message. Participants were only able to accurately communicate sarcasm and humor in barely half—56 percent—of the e-mails they sent. And if that isn’t bad enough, most people had no idea that they weren’t making themselves understood.” 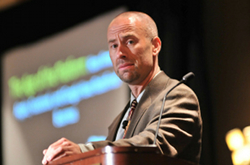 When asked why he wrote the book he replied, “I truly believe that we’ve reached a tipping point, and my research confirmed as much. Employees have never been more overwhelmed, the subject of Chapter 2. They’re being asked to integrate more content, more messages. They’re checking e-mail on weekends, holidays, and vacation (when they take it). They’re constantly on call, barely able to keep their heads above water.

Fortunately, there’s a two-fold solution, and I didn’t see any book out there that attacked this problem from this particular angle. First, we can embrace simpler language. There’s no reason to use terms “value-add use cases” and other linguistic atrocities. Beyond that, everything need not be communicated via e-mail. New, truly collaborative tools like HipChat, Smartsheet, and scores of others make it easier than ever to communicate effectively. And let’s not forget the ability go old school. Sometimes, an in-person meeting or phone conversation is the best way to proceed. Far too many of us seem to have forgotten that.”

The book is divided into eight chapters within four main parts: Worlds Are Colliding; Didn’t You Get That Memo? Why We Don’t Communicate Good at Work; Message Received; and What Now?

“Many business folks routinely forget their audiences. They forget —or have never heard of—the curse of knowledge. We’ve all seen IT people who seem to speak a different language when dealing with non-technical employees. What happens?” he asked. “Employees roll their eyes, tune out, or simply don’t understand what’s taking place. On the web, there’s no shortage of mind-numbing, vacuous marketing copy. Marketers and salespeople often speak in buzzwords and then wonder why their prospective clients don’t pull the trigger. Rare is the person who communicates perfectly, myself included. We all would benefit from using simpler language and minimizing our e-mails.”

Simon advises organizations about communication strategy, data and technology. He is also author of The Age of the Platform. 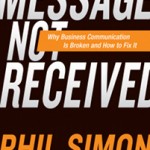