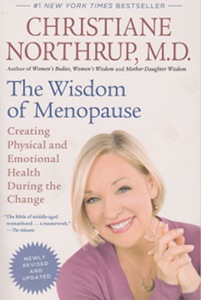 The Wisdom of Menopause

For 25 years Christiane Northrup, M.D. was a practicing physician in obstetrics and gynecology, identifying issues and treatments for patients. Now she dedicates “the second half of my life to illuminating all that can go right.”  Her efforts may be welcome by many among the 48 million women in the United States in midlife, undergoing perimenopause or menopause.

She believes menopause is “a mind/body revolution, which brings tremendous opportunity for happiness” instead of the often described problem phase of women’s aging packed with a collection of symptoms to be fixed. In 1994, she shared her views in Women’s Bodies, Women’s Wisdom, her first book which went on to become a New York Times Best Seller.

In Women’s Bodies, Women’s Wisdom Creating Physical and Emotional Health During the Change (Bantam Books, $22), also a New York Times Best Seller with 1.25 million copies sold in 16 languages, she discuses her conviction that many physical ailments are born from lifestyle choices and emotional concerns. The 745-page book, most recently updated in 2012, is divided into 14 chapters in which she discusses topics such as the brain, breast health, hormones, pelvic health, food and supplements, healthy bones, sex and sleep, and heart health.

In the book, she indicates menopause leads to a new stage filled with changes, both physical and emotional. They are not, as thought in the past century, a sign of inevitable aging and decline. Instead, they lead to a woman’s transformation, and a time when she must examine her life closely and choose who she wishes to be all over again. She points to a 1998 Gallup survey at the North American Menopause Society in which more than half of respondents between 50 and 65 indicated they were living the happiest time in their lives.

She is convinced that as women go through their midlife adjustments they are drawn less to a traditional supportive family role and more to new adventures and pursuits outside of their home life. That is in contrast to men in the same age group, the author says, because they in turn seek fulfillment in relationships more than in their work, a reversal of their approach in previous years.

According to her website, Northrup has more than 4.4 million books in print, in 24 languages. Her book Mother-Daughter Wisdom was voted Amazon’s top book of the year in parenting and mind/body health. 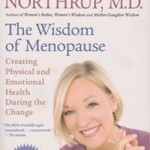 Click to buy The Wisdom of Menopause (Revised Edition)