Europe based search engine strives to make difference on environment 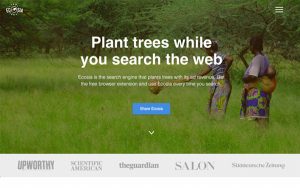 Ecosia, a Berlin, Germany based search engine, has between 2 and 2.5 million monthly active users who submit about 750,000 searches a day. The company’s search results and ads are powered by Bing. What makes the company special? In a world where it seems everyone is driven by greed alone, Ecosia donates 80 percent of its monthly profits ($50K to $80K each month) to planting trees in Brazil and Burkina Faso. Where the search engines keep track of users and their habits, Ecosia doesn’t.

“We don’t engage in any long-term saving or selling of personally identifiable user data,” said, Christian Kroll, chief executive officer and founder, Ecosia, by email when asked about the company’s privacy policies. “We believe that our users’ data and their privacy should be protected.”

Most of the search engine’s users are based in the Germany, Austria and Switzerland (DACH) region, where the company has captured 10 percent of non-Google users, followed by France and Spanish speaking countries, according to Kroll. Going forward he and his colleagues see the biggest potential in English speaking markets, and hope to eventually capture 2 percent of the global search market.

“We see Ecosia as a tool that allows users to capitalize on a daily habit (in this case searching the web) and do good without any further cost or effort on their side,” said Kroll. “We want to inspire others to come up with more business ideas like that and encourage them to use a share of their profits to support a good cause by proving that it’s actually possible.” 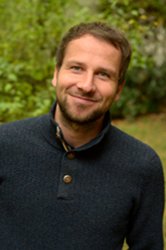 “I decided to move to Berlin because it was closest to my family and offered (and still does) great opportunities for tech and green start-ups,” he said when asked about his choice of base. “The rent is very affordable, there are many creative and highly talented people from all over the world and people generally seem very open to topics like sustainability and shared economy.”

The entire Ecosia team is based in Berlin. There are 15 people, most of them full-time workers. Kroll founded the company in 2009 after traveling extensively. Despite several attempts it was not possible to speak with Kroll by phone in time for the publication of this note. Long term, the company aspires to plant 1 billion trees and end deforestation.