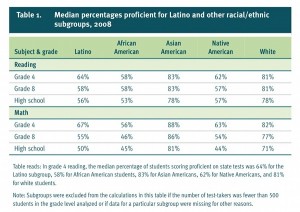 A colleague pondered out loud the other day: “In future decades how will marketers target America’s increasingly large emerging markets?” Although Asian American students are doing better than their emerging market counterparts, reading (and math) proficiency is low among Latinos and blacks compared to other students. If the young adults of the future can’t read will general marketing emphasize the visual and audio formats that they are able to consume?

In spite of some modest gains in test scores among Latinos in recent years, education gaps appear to be a serious problem that is not going away anytime soon. According to a recent report on Latino performance in school, in California, the state with the largest Latino enrollment, Latino students were the lowest-performing subgroup in reading at all grade levels.

On the last day of June 2010 the Center on Education Policy (CEP) released a series of reports on the performance of Latino, African American, Asian American, Native American and white students on state reading and math tests. The reports also examine the implications of CEP’s findings about achievement for each ethnic/racial subgroup.

Although Latinos still perform well below Asian American and white students on state tests and many issues remain to be resolved when it comes to education, especially in states with a high percentage of Latinos, according to the results of the reports, some Latino students are performing better on state reading and math tests than in the past.

Between 2002 and 2008 for grades four, eight and the high school grade assessed for the No Child Left Behind (NCLB) Act the performance of Latino students on state reading and math tests improved in most states. 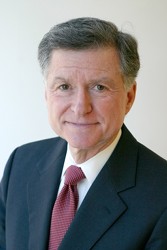 In 2008, Latino students were the lowest-performing racial/ethnic subgroup in at least one subject/grade combination in 11 states with sufficient data for the study. The achievement for Latino students in 2008 was slightly more negative in the five states that together enroll more than 70 percent of the nation’s Latino students California, Texas, Florida, New York and Arizona.

CEP analyzed 2008 state test results and trends since 2002 in the Latino-white achievement gap and in the percentages of Latino students reaching various achievement levels. Their findings were drawn from test data, gathered by CEP, from all 50 states.

The Latino student report indicates that states with increases for Latino fourth graders since 2002 outnumbered states with decreases at the basic, proficient, and advanced achievement levels. Latino students have also improved achievement at grades four, eight, and the tested high school at a fast enough rate to narrow gaps in the percentage reaching proficient in reading and math in a large majority of the states with sufficient data. Since 2002 gaps narrowed more often than they widened, according to the mean test scores results.

The researchers concluded that the “relatively low performance of Latino students, who in less than a generation will comprise roughly three in ten American children, is an urgent issue. The nation’s economic and social well-being will be compromised without efforts at all levels of government to develop policies to increase achievement for Latino young people.”

Based in Washington, D.C., and founded in January 1995 by Jack Jennings, the Center on Education Policy is “a national, independent advocate for public education and for more effective public schools.” According to a press release the Center represents no special interests. The Center strives “to help citizens make sense of the conflicting opinions and perceptions about public education and create conditions that will lead to better public schools.”