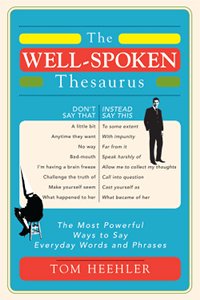 Often business people use the same words and phrases repetitively. It is not that they do not know other words it is that certain words and expressions have become familiar and comfortable. While that may be acceptable in everyday conversation with colleagues at the office it may present less than a professional face when attending meetings with clients, bosses or others in the industry.

A rich vocabulary populated with phrases other than “you know” and “not so much” and such popular expressions may enhance the way others perceive our knowledge and abilities and better position us for growth and promotion. To make a good impression we could slightly alter the word choices we usually make. Instead of saying elegant maybe we could say luxuriant; instead of saying writing skills we may try saying writing prowess, for example.

The Well-Spoken Thesaurus (Sourcebooks, $12.99), a 405-page softcover book of alternate words by Tom Heehler, could be a handy tool for vocabulary development. Published in February 2011 the book is the result of four years of work by the author after enrolling at Harvard University in the spring of 2006. Finding no easy way to improve his speech and prose quickly, he wrote down what he said and paired it with what he thought he should have said.

Heehler considers words to be “like little gods” and believes they affect people’s political leanings, the way they see reality, their confidence and self perception, according to the On Becoming Articulate section at the beginning of the book. In that section he goes on to say that people who are well spoken are expected by others to be more knowledgeable, more informed and capable of great things.

The Thesaurus contains 17 lessons from famous authors, like Ernest Hemingway, to well known speakers, such as President Barack Obama in the first part of the book. It also includes thousands of alternatives to common words and phrases.

Heehler is a degree student at the Harvard University Extension School and creator of Fluent in Five Languages, an online language course where students learn to speak four languages, French, Italian, Spanish, and Romanian simultaneously. 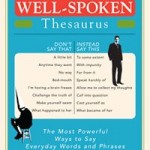