Many people are aware that there were labor shortages in the United States during World War II, what they may not know is that to overcome the situation the government initiated a series of agreements with Mexico to recruit guest workers for American farms and railroads. The Emergency Farm Labor Program, more familiarly known as the Bracero Program, brought as many as 2 million Mexicans to the United States for this purpose.

While the work was often grueling, the program offered participants economic opportunity, and the contributions made by these laborers have had significant impact on the political, economic and social climate of both countries, according to the Smithsonian Institution Traveling Exhibition Service (SITES).

This fall the Smithsonian Institution Traveling Exhibition Service is featuring an exhibit about this little-known chapter in American history as its fall 2012 free resource for schools, migrant education centers, museums and libraries. Titled “Bittersweet Harvest: The Bracero Program, 1942-1964,” the exhibit, based on the traveling exhibition by the same name with images and interviews by documentary photographer Leonard Nadel, includes a set of six bilingual posters made this year based on the materials from the exhibition. 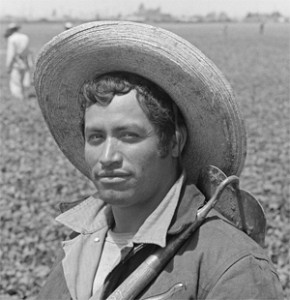 The exhibit was organized by the National Museum of American history in partnership with the SITES, and received federal support from the Latino Initiatives Pool, administered by the Smithsonian Latino Center. The collection will be on display in several states through 2014. Two copies of the same exhibition have visited 10 cities nationally. A list of cities and dates may be found at sites.si.edu/bracero/

“We partnered with University of Texas, El Paso and Brown University and other regional universities to invite former braceros and family to participate,” Steve Velasquez, curator, original Bracero exhibition, explained by email when asked about the selection criteria for the exhibit. “We recorded over 700 interviews. We used the Nadel images as a guide touching on the themes of why they created the program and why they journeyed, what kinds of work did they do, what was the experience like, and what was the legacy of the program in the US. We reviewed close to 200 interviews to use in the exhibit. The poster set is drawn from Bittersweet Harvest exhibit.”

In response to the question about the people and organizations responsible for selection of the project, he said: “We held an advisory meeting in 2005 with other experts in Mexican American history, bracero history, public history, agriculture/labor history, and Latino history. Our partners contributed resources to the collecting of the materials. George Mason University helped create the website braceroarchive.org. At the Smithsonian Institution the curators and educators were Peter Liebhold, Steve Velasquez, Magdalena Mieri, and Bonnie Campbell Lillienfeld. Kristine Navarro and staff from UTEP  Matt Garcia from Brown Univ., Sharon Leon from GMU. As well as a host of other institution that provided space to do collecting.”

Little information remains of the program participants today, he explained: “We have no record of how many remain in the US today. The contracts indicate that they needed to return to Mexico at the end of the contract or after 18 months. From our research we know some were sponsored to get work permits and citizenship by growers or married Americans. Some returned later in life. Some went back to Mexico never to return. Some skipped out on the contracts. Many men held multiple contracts.”

The organizers have not decided what will happen to the exhibition when the tour ends. The National Museum of American History collects, preserves and displays American heritage in the areas of social, political, cultural, scientific and military history. The Smithsonian Latino Center is dedicated to ensuring that Latino contributions to arts, sciences and the humanities are highlighted, understood and advanced through the development and support of public programs, scholarly research, museum collections and educational opportunities at the Smithsonian Institution and its affiliated organizations across the United States.