Article and photo by Fredwill Hernandez 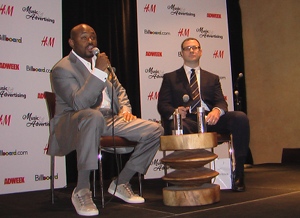 On June 4 and 5, 2009 Billboard and Adweek partnered to host the first conference catered to music and advertising. The two day Music and Advertising Conference held at the W hotel in New York brought together industry insiders of the music and advertising world which focused on the importance of music incorporated in commercials and advertising campaigns. Thirty-one sponsors like Studio Media Group, H & M, and Sonicbids, along with the panelists and 400 people attendees heard presentations about making the connection between music brands and bands.

Conference highlights included a question and answer session with Bill Werde, editorial editor, Billboard and Steve Stoute, founder and chief creative officer, Translation LLC. Stoute was responsible for doing Chris Brown’s Wrigley gum deal stated that client Brown may still have a shot, in reference to his client’s run in with the law. He announced Translation recently signed Lady Gaga and plans to treat her as a brand.

Another conference highlight was a sit down with Pharrel Williams, the Neptunes, producer and front man who recently partnered with Cornerstone to create a new agency. He spoke about how Teddy Riley, producer and front man for R&B group Guy gave him his first brake. Williams elaborated on how his deal and ad campaign for Converse shoes came about.

As record sales have declined music record companies and artists have looked at other ways to offset costs and new ways to make revenues. According to panelist David Keefer, global director, Media and Entertainment, Siegel and Gale simplified branding as “what you think, feel, and visual experience you get, or as what you hear, taste and touch.”

The conference emphasized the importance of music and branding, and how many acts have benefited and piggy backed off of branding opportunities. One such act was Australian duo The Veronicas who spoke on how they contributed music and how their music took off after they helped Bayer brand Yaz, a birth control pill.