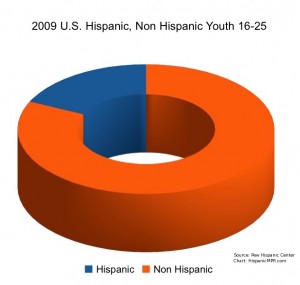 What’s on Latino youths minds? Why should business people, marketers and mainstream Americans care? According to the Pew Hispanic Center, this is the first time in the history of the United States that a minority ethnic group has represented such a large a share of the youngest Americans. Eighteen percent of people 16 to 25 in America claim Latino ethnicity. These young men and women represent an important part of the future of our country and will continue to do so for years to come since one of every four babies born in the United States today is Hispanic.

A recent Pew survey indicates Latinos 16 to 25 years old believe in the value of education, hard work and a career. These young people have in common a degree of satisfaction with their lives and optimism about their future. At the same time the youths that responded to the survey appear more likely to drop out of school, live in poverty and be teen parents than mainstream youths. The Pew researchers also believe many of these young people are exposed to gangs and live between two cultures. That may not be surprising since the researchers estimate almost one of four (22 percent) Hispanic youths between 16 and 25 are unauthorized immigrants.

The 150-page report, Between Two Worlds: How Latino Youths Come of Age in America, authored by the staff of the center, is based on analysis of government demographic, economic, education and health data sets; a series of focus groups; and a survey conducted between August 2009 and September 2009 among a random national sample of 2,012 Hispanics ages 16 and older, with an oversample of 1,240 Hispanics ages 16 to 25. The survey was conducted in English and Spanish by cellular and land line telephones.

The report offers a generational analysis of the behaviors, values and experiences of Latino youth who are immigrants themselves (about one-third) and those who are the children and grandchildren (or higher) of immigrants and who responded to the survey.

Two-thirds of Hispanics ages 16 to 25 are native-born Americans. This year marks the first time that so many, 37 percent, of Latinos in this age group are the U.S.-born children of immigrants. An additional 29 percent are of third-or-higher generations while only 34 percent are immigrants themselves. Although Latinos only make up 18 percent of all youths 16 to 25 in the country in some states the percentage of Latinos in that age group is significantly higher: 51 percent of all youths in New Mexico, 42 percent in California, 40 percent in Texas, 36 percent in Arizona, 31 percent in Nevada, 24 percent in Florida and in Colorado.

Survey respondents expressed a strong preference to be identified with their family’s country of origin (52 percent) over American (24 percent) or the terms Hispanic or Latino (20 percent). One third of the U.S.-born children of immigrants identifies first as American and half of the third and higher generation identifies as American first.

The Pew Hispanic Center is a project of the nonpartisan, non-advocacy Pew Research Center. The complete report is available on the organization’s website.

Tags: Between Two Worlds: How Latino Youths Come of Age in America, hispanic youth 16-25, us youth 16-25