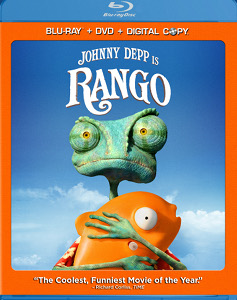 The voice of carefree star of the Pirates of the Caribbean franchise and a cast of other voices like Bill Nighy and Alfred Molina star in Rango, a quirky unexpectedly surprising movie. The animated comedy was released in theaters earlier this year and is due to be released on DVD and Blu-Ray today from Paramount Home Entertainment. The 107-minute film rated PG for rude humor, language, action and smoking sells for $39.99 for the Blu-Ray and DVD combo and $29.99 for the DVD. Scroll down to watch a video clip of Rango.

Johnny Depp voices Rango, a chameleon living as an ordinary family pet who dreams of being a fearless hero and through twists of fate becomes the sheriff of Dirt, a lawless desert town. Directed by Gore Verbinski, the man behind the Pirates of the Caribbean franchise the film already earned more than $230 million worldwide. Voices in the film include Isla Fisher (Horton Hears A Who!), Abigail Breslin (Kit Kittredge: An American Girl), Ned Beatty (Toy Story 3), Alfred Molina (Spider-Man 2), Bill Nighy (Harry Potter and the Deathly Hallows: Part 1), Harry Dean Stanton, (“Big Love”), Ray Winstone (Indiana Jones and the Kingdom of the Crystal Skull) and Timothy Olyphant (“Justified”).

Jake the rattlesnake in Rango