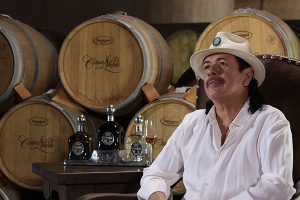 A family distillery that manufactures Single Estate Organic tequila exported to 23 countries has teamed up with Carlos Santana to further its reach. The famous musician became part owner and board member of Casa Noble and will use his name to promote the tequila brand with 60 percent of its worldwide sales in the United States.

Although the details of the deal were not made public plans are in place, HispanicMPR.com was informed by email, to promote the brand through public relations strategies and social media. The owners, the Hermosillo Family, will be working personally with Santana around his concerts and directly with accounts and distribution to generate interest and awareness about Casa Noble.

“We also plan on creating an event where Carlos will participate and can have direct contact with Casa Noble fans. We want to let everyone know that the passion that he has for his music translates to the passion we all have for Casa Noble,” said Jose Hermosillo, chief executive officer, Casa Noble.

To date Casa Noble has relied on print media efforts to reach its target audience divided evenly between genders mainly in Mexico and the United States. Executives at the company are believers in community outreach, tastings and special events. The company has offered Fine Tequila Tastings in many areas in United States and Mexico. The Casa Noble brand has been represented in events such as the launch of Rolls Royce Fantom in the United States, the Guggenheim Aztec Exhibition, and Virgin Galactic party in Los Angeles, California.

“We have come together because I love the Tequila,”said Santana in a press release. “Passion, dedication and integrity is what attracted me to Casa Noble Tequila. I feel at home with my new family at Casa Noble. They strive for excellence and don’t take shortcuts. Just like the music of Santana, one note or one drop… they are the same thing. You have to feel each note from your heart. Casa Noble and my family have the same origin, Jalisco, Mexico. My family roots date back to the 1700’s in Jalisco. My father is a Huichol Indian. When I visited the distillery, I immediately felt spiritually connected to the Hermosillo family and Casa Noble. Together we celebrate the gift of life and all of the blessing that come with it. Together we can all make a difference in the world.” 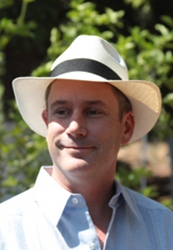 “Of course, Hispanics are a very important segment for us, they know tequila and enjoy hi(gh) quality tequila and are willing to pay more for it,” said Hermosillo when asked about the importance of the Hispanic market.

Casa Noble representatives have been in attendance at consular events in Washington, D.C. and Dallas and Latino leader events. The company has a Spanish language website and Spanish language point of sale materials in Hispanic areas of the country.

“Santana’s love for the spirit of Casa Noble and his commitment to this new partnership is exciting for everyone involved with our brand. Santana’s personal philosophy of quality and integrity in the pursuit of perfection is synonymous with the Casa Noble brand of fine ultra premium Tequilas. The linkage between Casa Noble and Carlos Santana will create broader recognition that Casa Noble’s triple distilled, organically certified tequila is truly one of the finest ultra premium spirits,” said Hermosillo.

“We have been exploring this partnership for some time. This is a natural synergy; Casa Noble Tequila is deeply rooted in the pursuit of quality, craftsmanship and tradition. Santana through his life and his music has dedicated himself to those same values which are the key motivators behind this alignment.”

Casa Noble tequila is made in Mexico and has a Denomination of Origin (like wines) which specifies that it can only be produced in the state of Jalisco and parts of four other states. The company, now owned by the Hermosillo Family and  Santana, has its distillery in the City of Tequila, Mexico and offices in Guadalajara, Mexico as well as in the United States. Its Asia base is in Singapore and its Europe base is in Germany.

Casa Noble tequilas, Crystal, Reposado, and Añejo, are made with blue agave, estate grown, picked and harvested by hand. After harvesting the plant is cooked in a traditional stone oven, leading to a natural fermentation and followed by distillation in traditional pot stills. After aging in French white oak the tequila is hand bottled at the estate. Santana has sold 90 million records and reached 100 million fans at concerts worldwide. The musician has won ten Grammy Awards, including a record-tying nine for a single project.